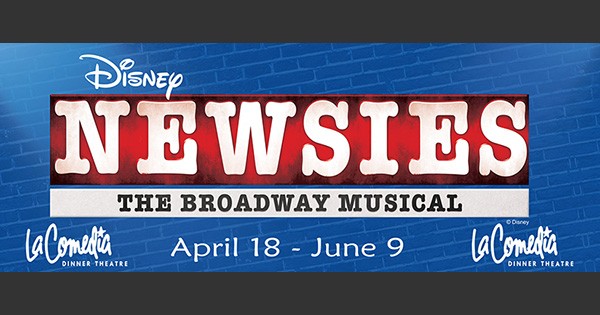 Stop the presses! This Disney film turned Tony-winning Broadway hit inspires everyone to fight for what’s right and seize the day.

Set in turn-of-the century New York City, Newsies is the rousing tale of Jack Kelly, a charismatic newsboy and leader of a band of teenaged “newsies.” When titans of publishing raise distribution prices at the newsboys’ expense, Jack rallies newsies from across the city to strike against the unfair conditions.

Based on the 1992 motion picture and inspired by a true story, Newsies features a Tony Award-winning score by Alan Menken and Jack Feldman and a book by Tony Award winner Harvey Fierstein. Featuring the now classic songs “Carrying the Banner,” “Seize the Day,” and “Santa Fe,” Newsies is packed with non-stop thrills and a timeless message, perfect for the whole family.

There should be headlines about collusion with Russia, or at least with Mikhail Baryshnikov, it’s the only reasonable explanation of how La Comedia produced such a top notch production of Disney’s ‘Newsies.’ No fake news, the absolute truth is the talent contained within ‘Newsies’ is worthy of a special investigation. Rather than two years, only a few minutes are needed to determine the skills contained within the entire cast of ‘Newsies’ is exceptional. 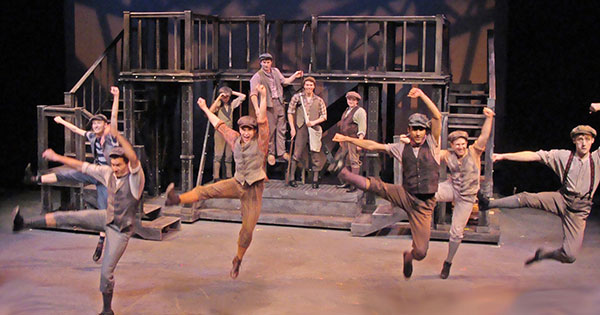 Based on the 1899 Newsboys strike in New York City, the musical ‘Newsies’ is an inspiring fast-paced tale. The chief among the ‘Newsies’ and head organizer of the strike is Jack Kelly, perfectly played by Ben-David Carlson. From the New York accent to his charming charisma, Carlson totally nails the character. Kelly dreams of escaping to a better life in Santa Fe, while with performances like this, Carlson will land in Tinseltown.

There’s much more to Katherine (Alex Skarmeas) than the name she writes under in the papers. I won’t ruin her secrets, as I’ll save the reveal for the dramatically shocking scene. I will say though, if Katherine writes as beautifully as Skarmeas sings, I’ll become a speed reader. From covering the strike, a romance begins to blossom between Katherine and Kelly, making them the best journalistic duo since Siskel & Ebert. Two thumbs up for their onstage chemistry.

As a whole, the Newsies are a harmonious group as their voices blend beautifully together. Their fancy footwork is equally exceptional. It’s clear that some in the ensemble are highly trained dancers, as their movements are so graceful. Between the singing and dancing during songs like ‘The World Will Know’ and ‘King of New York’ it’s almost sensory overload. Perhaps ‘Newsies’ should come with an advisory for an overexposure of greatness.

Every great story needs a great villain, which in this case is Chris Kramer as Pulitzer. If a Pulitzer Prize was given for acting, Kramer would be a most worthy candidate so it’s fitting that he plays Pulitzer, the money-hungry newspaper tycoon. Though his time on stage is relatively short, Kramer makes the most of it in portraying a despicable nemesis.

Deserving of special mention is Johah Kramer as Crutchie, whose smile is endearing. El More as Medda Larkin for her beautiful voice, Baylor Browning for his acrobatic flips, and Rachel Hoover for scoring laughs and making a big impression in a bit part. I hate leaving anyone out as everyone is deserving of being featured ‘above the fold.’

Now just don’t “Read all about it,” but I highly suggest seeing ‘Newsies’ at La Comedia, which continues through June 9.