War Horse at the Schuster Center 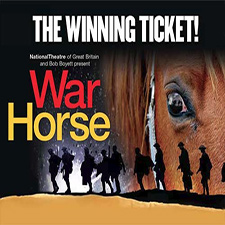 October 22-27, 2013 at The Schuster - A heart-warming tale of loyalty and friendship, WAR HORSE tells the story of young Albert and his beloved horse, Joey. Suitable for ages 12 and up.

War Horse at the Schuster Center

There's nobody who levitates nor is any woman sawed in half, but War Horse is a show of illusion. It's like magic how despite the use of very little scenery and no live animals, the stage show tells a compelling story of a boy and his horse during World War I. War Horse continues at the Schuster Center through Oct. 27.

It might sound challenging to present a show centered around a horse, Joey, which is portrayed only through puppetry, but it's expertly mastered. They don't have a single line of dialogue but the true stars of the show are the puppeteers who control Joey. Every step, gesture and movement by Joey is right in tune with realism. The only thing separating Joey from an actual horse are the humans that maneuver him and the lack of an odor. I used to think Mr. Ed was impressive, but Joey raises horses into a whole other level of performance.

We first meet Joey as a foal, when his bond with Albert (Michael Wyatt Cox) is formed. A relationship is also instantly formed between the audience and Joey as it's fascinating to witness the transformation from puppet into a live animal. It's a remarkable illusion.

Almost as equally impressive about War Horse is all the places it takes you from a farmhouse to the wars battleground, putting you right into the center of the action, without any big set pieces. It's performances, music and lighting alone that sets all the scenes. A war is difficult to stage, especially with the inclusion of charging horses, but War Horse does it successfully.

In addition to Joey, the entire cast of War Horse deserves credit as part of Joey's charm comes from Cox's role as Albert. His heart is clearly tied to the horse and he pulls us along on his quest to be reunited with him. His parents, Billy (David Hurwitz) & Rose (Maria Elena Ramirez) are enjoyable in their scenes, though in totally different ways. The father is despised for his mean spirited ways, while the mother has a loving heart. As Captain Friedrich Muller (Andrew May) also shines as the main caretaker of Joey and his horse, Topthorn, during the war. Furthermore, there's a goose that steals a number of scenes.

Far from a typical musical, the characters don't randomly break out in song, but all the singing is done by one individual, (John Milosich) who acts as a type of narrator. His voice is splendid and strong enough to carry all the shows musical needs.

War Horse is a masterpiece, with a heart wrenching ending that you won't want to miss. War Horse is at the Schuster Center through Oct. 27 go to www.ticketcenterstage.com for tickets.

A heart-warming tale of loyalty and friendship, WAR HORSE tells the story of young Albert and his beloved horse, Joey. This powerfully moving and imaginative drama, filled with stirring music and songs, is a show of phenomenal inventiveness that is currently playing to packed houses in London and around the world. At its heart are astonishing life-sized puppets created by South Africa’s Handspring Puppet Company, that bring to life breathing, galloping, charging horses strong enough for men to ride.
© 2022 Dayton Local. Unauthorized use and/or duplication of this material without express and written permission from Dayton Local is strictly prohibited. Excerpts and links may be used, provided that full and clear credit is given to Dayton Local with appropriate and specific direction to the original content.