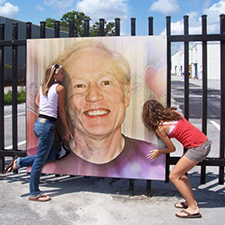 Best known for his regular appearances on the Bob and Tom radio show with his 'One Minute Songs' and 'Cavalcade of Celebrity Birthdays', Cavanagh is a master comedian.

A fan-favorite at Wiley's, the quick-witted Tim Cavanagh returns for shows February 14 & 15. Best known for his regular appearances on the Bob and Tom radio show with his 'One Minute Songs' and 'Cavalcade of Celebrity Birthdays', Cavanagh is a master comedian.

Both clean and funny, a skill few comics can claim to have, a Tim Cavanagh show is guaranteed to cause uncontrollable fits of laughter (Doctor recommended). The Chicago native agreed to answer my 10 Random Questions.

10. What are your favorite movies?
Defending Your Life, Groundhog Day, It's A Wonderful Life

9.   What do you think will happen first: The Cubs win a World Series or another President from Chicago gets elected?
The Cubs have not won a World Series in 106 years. Before Barrack Obama was elected, the last person from Illinois to be President was Abraham Lincoln. And those two elections happened 148 years apart. I think the Cubs will have one of their former players elected President before they win a World Series. President Giovanni Soto has a certain ring to it. Plus, there's a pretty good chance our next President will also be from Chicago-Hillary Rodham grew up in Park Ridge, a western suburb.

7. What would you name the autobiography of your life?
Charlie Sheen: In My Own Word. I just think I would sell more books with that than I would with, Tim Cavanagh: A Better Life Through Proper Grammar.

6.   What is something bad about the worst hotel you have ever stayed in?
Years ago, my wife and I checked into a quaint little motel in Waterville, Maine. When we came back to our room after I had done a show in town, we walked in on a couple "being intimate" in our bed. We turned around, checked out, and drove all the way to Massachusetts, where we found a nice hotel-and a good therapist.

5. What have you learned in the past week?
That former Rolling Stones bass player sells a Signature Metal Detector.

4. If you could trade places with anyone in the world, who would it be and why?
Bill Wyman's oldest son, because then I'd be first in line to inherit my old man 'bitchin' Metal Detector business.

3. What was your most embarrassing moment?
Trying to get into my hotel room, then going down to the front desk to have them reactivate my key, and only then realizing that I wasn't even in the right hotel.

2.    What is the hardest thing you have ever had to do?
Answer the question about my most embarrassing moment.

1. Where do you go every time you are in Dayton?
I go Krogering. Never miss it.

This Bob & Tom Favorite is famous for his "One Minute Songs". He's hilarious without being offensive. His numerous TV appearances include the Showtime Comedy Club Network and Comedy Central.