Joseph and the Amazing Technicolor Dreamcoat at The Schuster
Login

Joseph and the Amazing Technicolor Dreamcoat at The Schuster 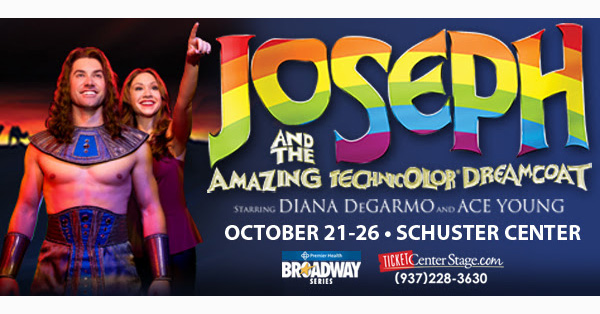 October 21-26, 2014 - the irresistible family musical about the trials and triumphs of Joseph, Israel’s favorite son.

Joseph and the Amazing Technicolor Dreamcoat at The Schuster

As contestants on ‘American Idol’ both Ace Young and Diana DeGarmo had aspirations of entertaining the world with their vocal talents. Their wishes have been granted as their performances are awe inspiring in ‘Joseph and the Amazing Technicolor Dreamcoat,’ at the Schuster Center through October 26. 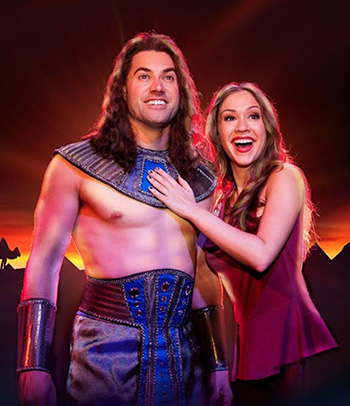 In the words of Randy Jackson, “Yo Dawg, we got a hot one tonight,” is a fitting judgment of the beloved musical. Even Simon Cowell would have to approve of not only Young and DeGarmo’s performance, but the effort of the entire cast. From beginning to end there is hardly time to breathe during the high energy performance that never misses a single beat. If all the stories from the Bible could be told in such an entertaining way I would be a biblical scholar, or at least know a verse other than John 3:16.

I could listen to DeGarmo tell any story, as her angelic voice is almost as miraculous as the parting of the Red Sea. In the role of Narrator she excels at setting the rapid pace and hits every note in a clear, radiant manner. She is matched in perfection by her real-life husband, Ace Young, whose voice is as impressive as his abs (I couldn’t help but notice). As ‘Joseph,’ Young carries the weight of the title role with ease. In both physical movement and voice, his range stretches as far as the sun can shine.

Every pastor or worship leader should see ‘Joseph’ if for no other reason, to learn how to make a service move quickly. The action was so fast and furious that it was over before I even got fully settled into my seat (and the Schuster Center chairs are comfy). There were no dull moments or time allowed to even check my watch. It’s true, time really does fly when you are having fun…did you know that you have been reading this review for an hour already?

The supporting cast, particularly all the brothers, could challenge the Jackson 5 as the most musically blessed group of siblings. Their presence on stage is always a delight, as they even make clearing off the table a pleasurable chore. A certain highlight of the show is their rendition of ‘One More Angel In Heaven,’ led by Reuben (Brian Golub) which transitions between somber and celebratory. The routine earned the biggest applause of the night and deservedly so as with the dancing and vocals, the entire ensemble were divine.

Special credit must also be given to Ryan Williams for his royal performance as Pharoah who channels Elvis for his scene stealing appearance.

October 21-26, 2014 at The Schuster! One of the most enduring shows of all time, Tim Rice and Andrew Lloyd Webber’s JOSEPH AND THE AMAZING TECHNICOLOR DREAMCOAT is the irresistible family musical about the trials and triumphs of Joseph, Israel’s favorite son. Directed and choreographed by Tony Award® winner Andy Blankenbuehler, this new production will feature Broadway/television star Diana DeGarmo (Hairspray,Hair) as The Narrator and Broadway star Ace Young (Grease, Hair) as Joseph. Retelling the Biblical story of Joseph, his 11 brothers and the coat of many colors, this magical musical is full of unforgettable songs including “Those Canaan Days,” “Any Dream Will Do” and “Close Every Door.” Recommended for ages 13 and up.
© 2022 Dayton Local. Unauthorized use and/or duplication of this material without express and written permission from Dayton Local is strictly prohibited. Excerpts and links may be used, provided that full and clear credit is given to Dayton Local with appropriate and specific direction to the original content.