Its a Wonderful Life at Victoria Theatre
Login

It's a Wonderful Life at Victoria Theatre 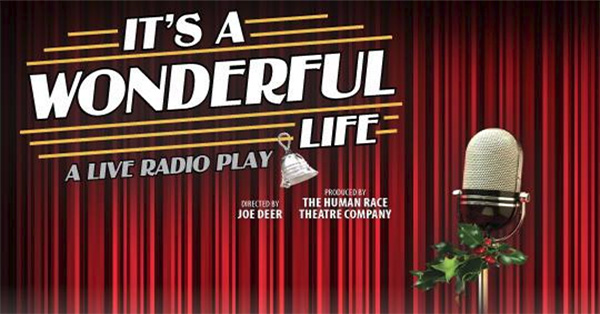 December 3-15, 2013 at Victoria Theatre - This beloved American holiday classic comes to captivating life as a live 1940s radio broadcast – complete with jazzy radio jingles, hilarious commercials, and a glamorous cast. Ages 6 and up.

It's a Wonderful Life at Victoria Theatre

To be honest, my expectations for “It’s A Wonderful Life: A Live Radio Play,” were rather low as I figured the reading of a full length movie couldn’t be very entertaining. I have no shame in admitting that I was wrong. The show was a delight to witness and to call it a reading would be an extreme understatement as the cast is very lively throughout the performance. The energy in their voices turns the radio play into a virtual full fledged stage production of “It’s A Wonderful Life.”

The scene is set in the studios of WHIO, but your mind is constantly taken to Bedford Falls. Members of the cast play multiple roles, often having to be both participants in a conversation between two characters. It’s very impressive how with just a slight change of tone the cast can transform themselves from one part to another.

The part George Bailey is played by Todd Lawson, who excels in the iconic role. He makes the part his own, without over-trying to match Jimmy Stewart’s unique sound. Like his fellow cast mates the inflection in Lawson’s voice provides all the needed scenery. Many times I forgot it was a radio play rather than a normal performance, especially during Lawson’s most emotionally riveting scenes.

A show stealing performance is also turned in by Mark Chmiel as Harry, Clarence and a number of other bit parts. The agile actor is instantly likeable and has a voice and range of physical comedy that are both limitless.

Another major player is Scott Stoney as the villainous Potter, Uncle Billy and the host of the radio performance. He’s like a chameleon, hiding himself into each character. In one breath Stoney is the dastardly Potter and the next the absent minded Uncle Billy, all while never losing track of which is which.

Though he never utters a single word the talents of Kevin Anderson speaks volumes as the sound effects man (professionally known as the Foley Artist). With just a table of props he provides all the needed sounds and is pitch perfect each and every time.

The conclusion is particularly moving as George Bailey realizes his worth, while the audience concludes that they’ve witnessed an exceptional theatrical experience. “It’s A Wonderful Life: A Radio Play,” continues at the Victoria Theatre through December 15. Plenty of good seats still remain. Go to www.ticketcenterstage.com for more information.

This beloved American holiday classic comes to captivating life as a live 1940s radio broadcast - complete with jazzy radio jingles, hilarious commercials, and a glamorous cast. With the help of an ensemble that brings a few dozen characters to the stage, the story of idealistic George Bailey unfolds as he considers ending his life one fateful Christmas Eve.
© 2022 Dayton Local. Unauthorized use and/or duplication of this material without express and written permission from Dayton Local is strictly prohibited. Excerpts and links may be used, provided that full and clear credit is given to Dayton Local with appropriate and specific direction to the original content.