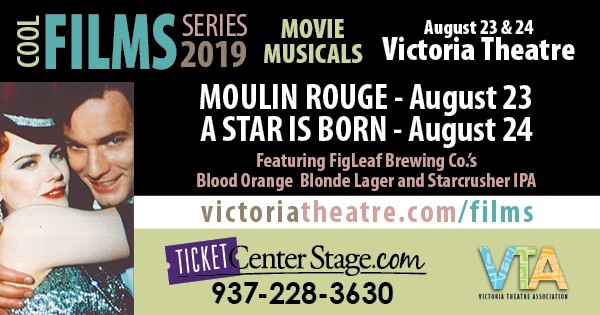 Featuring Nostalgic Films at the Victoria Theatre in downtown Dayton.

Victoria Theatre Association announces the 2019 Cool Films line-up including themed marathon weekends and the return of live organ concerts on the Mighty Wurlitzer. New to the Cool Films Series are hosted screenings of Napoleon Dynamite with Jon Heder, Efren Ramirez, and Jon Gries, The Princess Bride with Corey Elwes as well as two movie events with radio and podcast “Filmically Perfect” hosts J. Todd Anderson and George Willeman. Tickets and Passbooks for the 2019 Cool Films Series go on sale at 10 a.m. on Friday, April 19 at Ticket Center Stage, by calling 937-228-3630, (toll-free) 888-228-3630 or online at www.ticketcenterstage.com.

$39 PASSBOOKS – new this year – get your free popcorn & soda with your passbook! Each book includes 10 films passes and 10 popcorn & soda passes for you to use in any combination across the series. Single Tickets are $7, so passbooks make your admission nearly half off!

LIVE THEATRE ORGAN IS BACK! Come early to all the Victoria Theatre showings to hear the Mighty Wurlitzer like it was meant to be played with organists Justin and Justin.

NAPOLEON DYNAMITE: A Conversation with Jon Heder, Efren Ramirez & Jon Gries
Friday, July 12 at 7:30 p.m. – NOTE – this event is at the Schuster Center
TICKETS: VIP Tickets $100 (includes a meet and greet), all other seats $40

HITCHCOCK MARATHON at the Victoria Theatre

RESPECT FOR REDFORD at the Victoria Theatre

“FILMICALLY PERFECT” at the Victoria Theatre

J. Todd Anderson and George Willeman hosts of the distinctive radio show & podcast “Filmically Perfect,” live and in person at the Victoria Theatre.  Anderson (filmmaker, storyboard artist and bon-vivant) and Willeman (film archivist, writer, producer, and actor-of-sorts) came up with their “Rules for The Perfect Movie” and will give their perspective on two great films.

THE PRINCESS BRIDE: An Inconceivable Evening with Cary Elwes
Sunday, Sept. 8, 3 p.m. – NOTE – this event is at the Schuster Center

TICKETS: VIP Tickets $150 (includes a meet and greet, plus a copy of his book, As You Wish: Inconceivable Tales from the Making of The Princess Bride), all other seats $40

For more information about the remainder of Victoria Theatre Association’s 2018-2019 Season as well as the 2019-2020 Season, please visit www.victoriatheatre.com.

All shows & dates subject to change.