A Mighty Fortress Is Our Basement @ La Comedia
Login

A Mighty Fortress Is Our Basement @ La Comedia 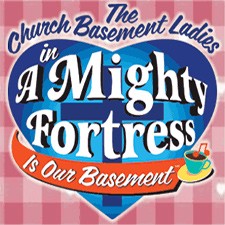 Your favorite Church Basement Ladies are back and up to even more crazy antics in the all-new musical A Mighty Fortress Is Our Basement.

A Mighty Fortress Is Our Basement @ La Comedia

'The Church Basement Ladies: A Mighty Fortress is Our Basement' provides a healthy dose of laughs, though many of the gags are repeats from previous productions. Admittedly some of them still made me chuckle, while others seemed past their expiration date. Some more originality would have been preferred rather than just relying on what worked before.

Much like chocolate, put Denise Cox (Vivian) in anything, and you have a high quality product. She's been in every 'Church Basement Ladies' productions and is the butter that holds everything together. There's no doubt that a number of audience members will go, just to see 'Vivian' and they won't be disappointed. Her 'spirited' performance in the final scene demonstrates that she's a chef at making people laugh. Vivian raids the cupboards and creates the most hilarious moments of the show. The final minutes are so entertaining that I was reluctant to see it end.

The year is 1960 and the dedicated women of the church kitchen are first preparing a banquet for Confirmation Sunday and then for the pastor's marriage. While Chris Kramer excels in every role he's cast in, in my eyes he'll always be Pastor Gunderson. We're finally given a glimpse of his work behind the pulpit, which is one of the few changes within the show.

Without ever even appearing on stage or uttering a single line, a star of the show is the Maid of Honor. Just by the way everyone talks about her and her….shape…makes her really stand out.

In their La Comedia debuts, Claire Theiss Hurley (Mavis) and Malerie Jo (Beverly) fit into the kitchen as if they have been there for years. As Mavis, Hurley can fire out one-liners faster than a high powered toaster and Jo embodies a teenager for her role despite being a young adult.

Returning as Karin is Becky Barrett-Jones, whose struggling with seeing her daughter (Beverly) grow-up, but must bring some sanity into the kitchen.

'The Church Basement Ladies' is a delightful dish, with familiar flavors, which will put a good feeling in your stomach, especially if you've never tried it before. The show continues through October 27. Call 1-800-677-9505 or 937-746-4554 to reserve your seat.