Smoke on the Mountain at La Comedia
Login

Smoke on the Mountain at La Comedia 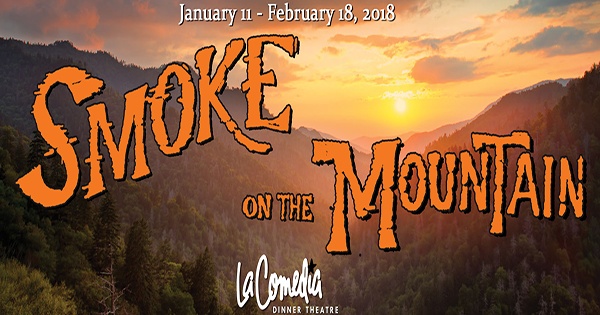 Smoke on the Mountain at La Comedia

Then our mouths were filled with laughter; our tongues sang for joy

If a member of the Sanders family was here, they could instantly name that verse as Psalm 126:2. The scripture is a near perfect description of Smoke on the Mountain as it’s full of laughs and joyful songs of praise. At La Comedia until February 18, Smoke on the Mountain is the only 90 minute plus church service that won’t have you praying for it to be over. 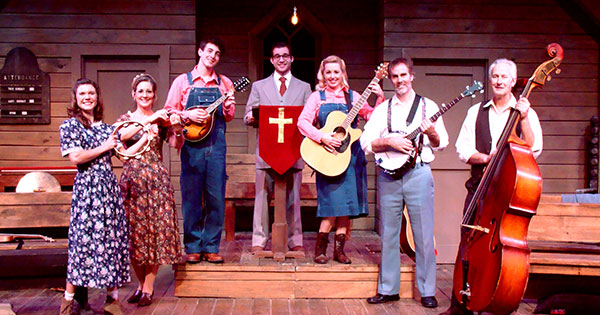 Set in the late 1930’s, Smoke on the Mountain follows the musically gifted Sanders family through an old-fashioned sing along at the Mount Pleasant Baptist Church in North Carolina. For those, mostly senior citizens, who miss the traditional style of service, Smoke on the Mountain is an answered prayer. It features 30 classic gospel songs, without any electric guitars, drum sets or flashy lights. It’s a true representation of how church was back in those days (only better).

If there’s ever a Bible written on physical comedy Marie Putko should be a disciple in it, based on her performance as June Sanders. With her own unique style of sign language, June has a most powerful voice, which results in a lot of laughs. It can be hard to bring humor to ancient hymns, but to Putko they are equivalent to a joke book. If deaf, her sign language is of no help, but to everyone else her technique is easily translated into laughter. In addition to her signing, Putko is reactive every second she’s on stage with a wide range of facial expressions. She’s always ‘in the moment.’ I was also impressed the amount of different instruments she played throughout the show, granted they are all the type that the kids in music class are given that can’t play anything else..i.e the triangle. I know because I was that kid. Putko truly is a God send and totally steals the show.  In this case, stealing is not a sin, but a blessing.

Talent does run rampant in the Sanders family, which is led by Burl (Brick Waltermire), who is very in-tune with his character, having been in 29 other productions of Smoke on the Mountain. His voice is also in tune whenever Burl takes part in a song. One of the most captivating moments of the show is when Burl gives his testimony/sermonette. His other half is Vera, (Becky Barett-Jones), a verse identifying machine, with a radiant voice. Vera takes center stage for an illustration with a ladybug, which turns chaotic when the insect flies down her dress.

The Sanders also have a set of twins; Denise (Emily Carlstrom), who is the girl and Cory Clark (Dennis), who you guessed it…is the boy. They both inherited the family’s musical talents, and Dennis delivers the most moving sermon that’s ever been delivered. From Billy Graham to Jesus himself, nobody has ever delivered a message that moves you to laughter as much as Dennis. Clark is perfect in his delivery, rivaling the ‘sermon on the mount’ as one of the best ever. Believe me, Dennis is unlike any preacher ever seen before. The final member of the Sanders family, is Stanley (Burl’s brother), played by the Messiah of La Comedia, Chris Kramer.

Though I grew up attending a church that sang out of a hymnal, I was surprised in that I only recognized a few of the songs in the show. The excellent voices still made them enjoyable though. For a trip back in time, to a church service of yesteryear, don’t miss Smoke on the Mountain. As June would ‘say,’ I give it two thumbs up, but who knows what that hand gesture would mean in her signing.

The Singin' Sanders Family is back in Smoke on the Mountain

The Singin’ Sanders Family is back in Smoke on the Mountain. Pull up a pew at a Saturday Night Sing in Mount Pleasant, North Carolina, and experience the way it was on the gospel circuit in the 1930s.

Scheduled to sing over 25 country and bluegrass gospel songs, the voices and instruments of the Sanders help keep spirits high as the Great Depression has taken its toll. They will sing traditional gospel classics such as “Rock of Age,” “The Church in the Wildwood” and “I’ll Fly Away” just to name a few.

Join Pastor Oglethorpe and the Singin’ Sanders Family as they make their joyous return to the La Comedia Stage.