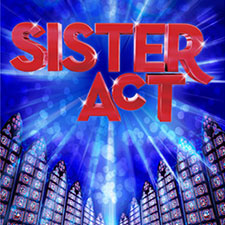 In the spirit of the Catholic Church, I have a confession…forgive me if you disagree, but I find Whoopi Goldberg highly nauseating. She makes it nearly impossible for me to stomach watching the 1992 film, Sister Act, which I was once a fan of. (Thankfully O.J Simpson has a limited role in The Naked Gun) One of the many positives about the musical version of Sister Act, at La Comedia through June 18, is its many laughs, magnificent music, and it made me forget all about Whoopi. There are many elements about this production of Sister Act that are worthy of praise.

Much credit goes to Ashley St. Juliette, in the lead role of Deloris, whose mastery of the part wiped Whoopi from my mind. She provides Deloris with enough sass and irrefutable traits to make her being a nun seem outrageous. However, when Deloris, a struggling lounge singer, witnesses her mobster boyfriend commit a murder, she must be placed in a convent for her protection. St. Juliette makes the role her own, and possesses a voice strong enough to reach the heavens. Don’t be surprised if she causes you to drop to your knees, not in prayer, but in laughter.

As a total contrast to Deloris, who is rough around the edges, is the totally straight laced Mother Superior (Linda Dew). It would come as no surprise if Dew is revealed to be a patron saint herself as she totally embodies the righteousness of the role. It is a delight watching Deloris and Mother Superior both struggle to accept each other. (With St. Juliette replacing Whoopi, I could even stomach watching The View, if Dew stood in for Joy Behar.)  Dew also performs some impressive vocals, with songs including ‘Here within These Walls’ and ‘I Haven’t Got a Prayer.’

It is typically difficult to tell one nun from another, as they all dress the same, but in Sister Act every cast member brings some individuality to their role. Matter of fact, they are such a fun group that I would consider joining their convent, if I were eligible…okay, not really, but I would attend for a fish fry. As Sister Mary Patrick, Kimberly Truncale provides a bright personality with an infectious laugh, Sister Mary Lazarus (Janet Ellen Brucken) may be up in years, but lays down some new age rhymes in a rap, and the meek and mild Sister Mary Robert (Hanna-Lyn Baxter) is radiant with a breakout rendition of ‘The Life I Never Led.’ Her voice is as glorious all by itself, similar to what I image a whole choir of angels would sound like. Speaking of a choir, Deloris totally rejuvenates the cathedral’s choir, with a genre of music that goes beyond contemporary. Their costumes and dance movements are enough to raise the spirits of even an atheist.

There are also some males in the solid supporting cast, including audience favorite John Rodney Turner as the endearing Eddie, who suffers from a problem with perspiration, but has a really big heart. He steals the spotlight during ‘I Could Be That Guy,’ during which he undergoes a transformation. The dastardly villain after Deloris is Curtis (Marc-Anthony Lewis), who is joined by three clueless henchmen; TJ (Jeremiah Byrant), Pablo (Manuel Cortes Alcazar), and Joey (Colin Cranstoun). One thing the trio is capable of doing is creating laughs by trying to show off their tools of seduction during ‘Lady in the Long Back Dress.’

Sister Act is a feel good comedy with a positive message and some suspense as well. It’s guaranteed to make you leave while singing its praises. Sister Act continues at La Comedia through June 18.

Special Note: I must also give credit to the inclusion of dried beef gravy on the dinner buffet. It’s so delicious that I went back for seconds.

Sister Act is the feel-good musical comedy smash based on the hit 1992 film that has audiences jumping to their feet! Featuring original music by Tony- and eight-time Oscar winner, Alan Menken (Newsies, Beauty and the Beast, Little Shop of Horrors), this uplifting musical was nominated for five Tony Awards, including Best Musical.

When disco diva, Deloris Van Cartier, witnesses a murder, she is put in protective custody in the one place the cops are sure she won't be a found: a convent!

Disguised as a nun, she uses her unique disco moves and singing talent to inspire the choir and breathe new life into the church and community. 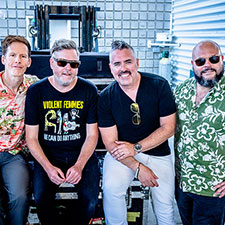