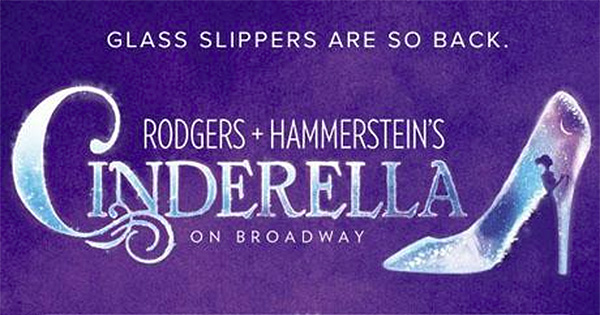 Michael Woody
Past Event - Sunday, February 14, 2016
This page may be updated if the event is repeated
Dayton Live
The Schuster Center
1 W 2nd St, Dayton, OH 45402 [map it]
Tickets on sale this summer.

February 9-14, 2016 at The Schuster - The world’s most famous makeover story just got a makeover!

Review of Cinderella
by Mike Woody

Everyone knows the story of Cinderella, or at least you thought so until seeing Rodgers + Hammerstein’s Cinderella. It contains all the classic elements of the original fairytale, but also features some twists and turns. The changes only creates a more enjoyable journey for the audience, as it’s never known what exactly is going to happen next. In the end it’s still a heart-warming love story that’s perfect for Valentine’s Day. Appropriately enough, Cinderella continues at the Schuster Center through February 14.

The end of the first act left me stunned and full of questions about, what is going to happen now? History had been rewritten as everything I once believed to be true became surrounded by doubt. For as long as I can remember, as sure as Christopher Columbus sailed the ocean blue, Cinderella left one of her glass slippers at the ball. So imagine my surprise when the act ends with her leaving the ball with both slippers in her possession! Yes, you read that correctly, but in a world where Trump is a leading presidential candidate, it’s possible.

One constant of Cinderella, which remains true in this version, is that the title character is beautiful. There’s big shoes, or in this case slippers, to fill when playing such an iconic role and Kaitlyn Davidson fills them perfectly. Whether dressed in rags or elegant gowns, Davidson radiates charm from both her inner and outer self. However, Cinderella is much more than just a pretty face, who can also sing, but is a strong woman determined to pursue her dreams.

A major step towards her dreams being made true is taken by Marie (Liz McCartney), who transforms into the Fairy Godmother. Not only is McCartney’s voice magical, but she performs some other impressive feats so Cinderella can attend the Ball. Among the highlights of the show are the amazing transformations that occur right before our eyes as Cinderella’s tattered clothes suddenly become Oscar worthy evening gowns. Without the assistance of foggy smoke the changes are made in plain view, yet I still don’t know how they were done. It’s certainly the fastest I’ve ever seen a woman get ready.

The entire cast is superb, including Prince Topher (Andy Huntington Jones), the evil stepmother (Blair Ross), and her two ‘real daughters’ Charlotte (Lulu Picart) and Gabrielle (Kimberly Faure). Special mention to Jean-Michael (David Andino) and Sebastian (Blake Hammond) for excelling at their parts and being real standouts. The costumes, particularly, all the gowns at the Ball are also worthy of recognition. The Ball is also blessed with some wonderful dancing.

In case you’ve been concerned, Yes, one of the slippers does end up with the Prince and a fitting must be held in order to find its rightful owner. The path to get there is just slightly altered from the norm. The Rodgers + Hammerstein’s Cinderella is like a classic car, fully refurbished with some modern features to provide a smooth free ride.

January 19-24, 2016 at The Schuster - The world’s most famous makeover story just got a makeover! RODGERS + HAMMERSTEIN’S CINDERELLA is the Tony Award-winning Broadway musical from the creators of The Sound of Music and South Pacific that’s delighting audiences with its contemporary take on the classic tale. This lush production features an incredible orchestra, jaw-dropping transformations and all the moments you love–the pumpkin, the glass slipper, the masked ball and more–plus some surprising new twists! Be transported back to your childhood as you rediscover some of Rodgers + Hammerstein’s most beloved songs, including “In My Own Little Corner,” “Impossible/It’s Possible” and “Ten Minutes Ago,” in this hilarious and romantic Broadway experience for anyone who’s ever had a wish, a dream…or a really great pair of shoes.

AGE RECOMMENDATION:
Our policy is children under the age of 6 will not be permitted. For the consideration of all patrons, children on laps and/or babes in arms are not permitted at Victoria Theatre Association Broadway presentations.