Little Shop of Horrors at LaComedia 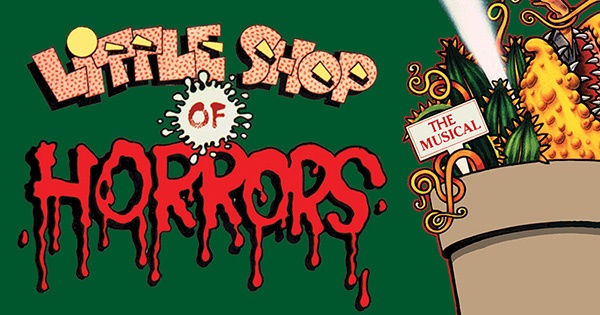 A deviously hilarious Broadway and Hollywood sci-fi smash hit musical, Little Shop of Horrors has devoured the hearts of theatre goers for over 30 years.

Little Shop of Horrors at LaComedia

While its premise is pretty far-out, at its core Little Shop of Horrors poses a pretty serious moral dilemma that causes some self-reflection or if nothing else an enjoyable evening (or daytime matinee) out. How far will you go to achieve fame, fortune, and the woman of your dreams? For anyone who struggles with sustaining any kind of plant life, you will feel like a master gardener after seeing this show. A sci-fi, comedy musical Little Shop of Horrors is at La Comedia through June 24. 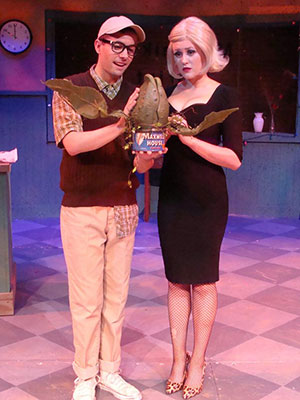 The lineage ‘or roots’ of Little Shop of Horrors goes deeper than I thought. The musical opened off-Broadway in 1982, which was based on a 1960 film. I was only familiar with the 1986 movie. The story revolves around a nerdy florist named Seymour (Tyler Fromson), who discovers a new and mysterious plant, with a dangerous appetite. If Dracula or perhaps anyone on Team Edward had a flower garden, it would include this plant that thrives on human blood. The venus flytrap like plant is named the Audrey II, after the woman of Seymour’s dreams. The reveal of Audrey II saves the flower shop from extinction and brings many changes to Seymour’s life. He becomes a media sensation, receives a number of financially lucrative offers, and romantic interest from the original Audrey. However, with cries of ‘Feed Me More,’ coming from Audrey II, it becomes more and more challenging for Seymour to quench its hunger. Seymour is draining himself, literally, and the only alternative is the blood of others.

There is nothing anemic about Fromson’s performance as Seymour is full of spirit. Whether it pratfalls, singing, or dealing with the stresses of caring for a man-eating plant; Fromson is A positive in every way. The show also features great performances by Dana Cullinane who illuminates the stage as Audrey with a bouquet of beautiful goodness. Culliane’s accent is pitch-perfect and she makes it easy to see why Seymour is so infatuated with her.

A secondary title could be, the Many Faces of Randy Cain as he has more roles in one show than some A-list actor’s play in a year. His primary role is of Orin the mean spirited, arrogant D.D.S boyfriend of Audrey’s. He’s a real gas as Orin and may make you spit. Cain pops up as frequently as weeds in a garden, with at least seven different roles. At one point he even changes genders faster than Bruce Jenner.

The biggest scene chewer of them all though is Audrey II. Despite all the great performances, the show would be a flop without a believable depiction of such a flamboyant plant. A simple sock puppet would not suffice. Much credit goes to props department and everyone responsible for presenting an Audrey II worthy of being teamed with The Muppets. Audrey II is operated by Colin Cranstoun and voiced by Jason O’Neal.

There are a number of standout songs; including Suddenly Seymour, Somewhere That’s Green, Skid Row and the title number Little Shop of Horrors. Much of the music is supported by the harmonious trio of Kaileah Hankerson, Berlande Millus, and Tiara Whaley. There’s also a non-traditional father and son dance between Seymour and the high strung flower shop owner, Mr. Mushnik, played masterfully by Todd Tucker.

It’s no fault of anyone involved with the production, as it’s how the show was written, but my only gripe is with the ending. The final song, Don’t Feed the Plants left a bad taste in my mouth. Trust me, it wasn’t anything from the delicious buffet, because I only ate the good stuff (no chicken gizzards, Brussel sprouts, or beets for me). It just seemed a little too cartoonish, and that’s from a show about a man-eating plant. On the bright side, I enjoyed the lighting effect that closes the show and brings the entire audience right into the action. Plus, the eggplant parmesan on the buffet was splendid, as was everything else I devoured, almost becoming Audrey III.

Little Shop of Horrors continues at La Comedia through June 24. You will want to plant yourself in a seat to watch it.

Howard Ashman and Alan Menken (Disney's The Little Mermaid, Beauty and The Beast, and Aladdin) are the creative geniuses behind what has become one of the most popular shows in the world.

The meek floral assistant Seymour stumbles across a new breed of plant he names "Audrey II" - after his coworker crush. This R&B-singing carnivore promises unending fame and fortune to the down and out Seymour as long as he keeps feeding it, BLOOD. Over time, Seymour discovers Audrey II's out of this world origins and intent towards global domination! 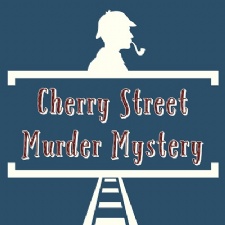