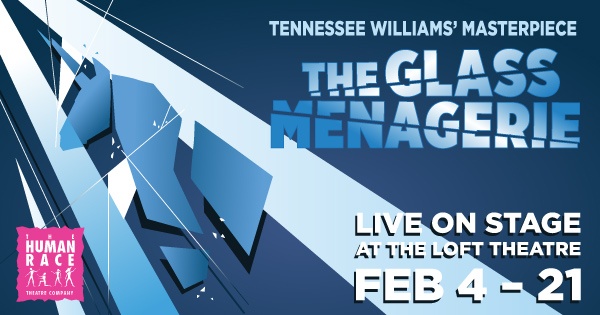 Memories as fragile as glass are tossed into the air in Tennessee Williams’ first great masterpiece. 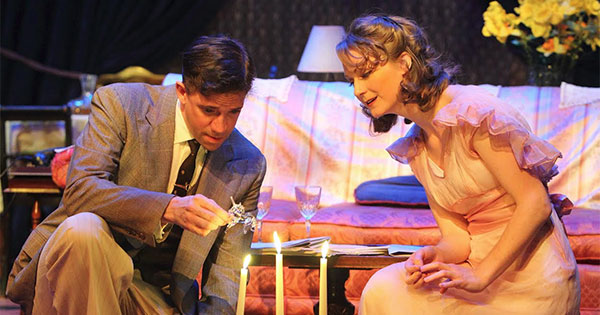 Review of The Glass Menagerie
by Mike Woody

Like in life, theatre does not always come with happy endings, or beginnings and middles for that matter. The Glass Menagerie is largely a reflection of its writers, Tennessee Williams, own life. Filled with abandonment and despair, the play is far from a fairytale but features dreamlike performances from the entire cast. The Glass Menagerie is depressing, leaving not much to smile about, except for being a top notch production.

Those who appreciate classic theatre will enjoy The Glass Menagerie, but don’t go expecting a high energy, fast paced show with lots of laughs. Its setting is as dreary as the content with dim lighting for a gloomy atmosphere. The characters each trapped in their own inner darkness.

The narrator, and central figure of the story is Tom, who Scott Hunt totally embodies. The audience feels his torment as every line is delivered straight from the heart with dramatic excellence. He regularly, ‘goes to the movies’ to try and avoid the sad realities of life, but there is no escape. It’s a heavy role, which Hunt masters without even breaking a sweat.

Much of Tom’s suffering is caused by his mother, Amanda, played by Jennifer Joplin. Though Amanda says some mean spirited things, it’s hard not to like the character, due to the admiration of Joplin’s performance. Her long winded tirades may leave the audience breathless, but Joplin still has more vigor to share. Amanda has fond memories of her past, once having 17 gentleman callers, but the glory days have since passed. She has high hopes for her daughter, Laura (Claire Kennedy), but is repeatedly let down. The severe shyness of Laura is perfectly captured by Kennedy, whose talents speaks volumes. Lost in the world around her, Laura’s primary focus is on her glass menageries.

The second act centers around Laura’s very first gentleman caller, Jim (Drew Vidal), arranged by Tom. A very charming fellow, things begin to look promising for Jim and Laura, but then the bubble is burst. The evening ends with damages done to the family that are beyond repair. The individuals are as fragile as a glass menagerie, and reach their breaking point.

The Glass Menagerie continues at The Loft through February 21. It’s the opportunity to see a classic play performed by an extremely talented cast.

Memories as fragile as glass are tossed into the air in Tennessee Williams’ first great masterpiece. Dreams meet reality and love becomes desperate in a shimmering drama of a family on the edge. Tom struggles in a modern day world while his mother holds tight to a fantasy of Southern gentility and his sister hides amongst the glistening crystalline creatures she collects. With an edge as sharp as broken glass, it’s a story that cuts deep into the longing of human hearts.

Out on 5th - downtown Dayton
Events Calendar Featured Events
Follow Us
Dayton Local takes reasonable measures to ensure the quality and accuracy of the information on this page. Use of this site is at your own risk, and by doing so, you agree to our Terms & Conditions. You can report inaccurate, misleading or inappropriate information using the button below. Thank you.
© 2022 DAYTON LOCAL