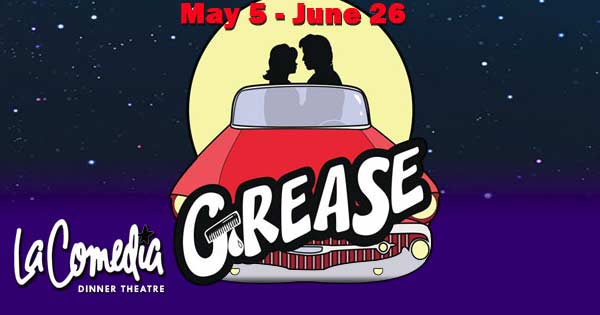 I have a secret, I know where you can see a high-energy production of one of the countries most beloved musicals. Eat a delicious, guaranteed to be satisfyingly delicious meal. Hear classic songs sung to perfection, and did I mention the sweet potato soufflé? Plus, witness perhaps the most beautiful pristine woman who has ever graced the stage over its 40 plus year history. I can almost hear you saying, tell me more, tell me more. No worries, I will, I have a word count to fill. I’ll tell much more about the wonderful performance of Grease, the original Broadway version, which is at La Comedia through June 26. 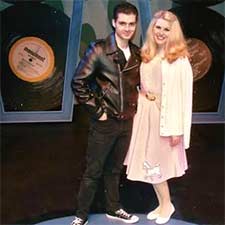 With a show like Grease, which everyone knows, (at least from the movie), a stellar cast is needed to keep it fresh and meet the audiences expectations. This cast more than delivers, especially due to the supporting players who steal much of the spotlight. I’ll tell more about the supporting cast soon. First though comes Bradley Farmer who totally embodies the angelic purity of Sandy. In my opinion, Farmer is one of the loveliest women I’ve seen at La Comedia, and her voice is a reflection of her image. The rendition of ‘Summer Nights’ is a highlight, along with her Sandy’s appearance at the end with a new attitude. Trust me, you don’t want to leave early. Her male counterpart, Hal Miers does a respectable job as Danny and is a master of the hand jive, but often seems overshadowed by the rest of the T-Birds.

It seems that with any mention of Grease the most talked about character is Rizzo and Halley Daigle filled the legend of the role and a pink nightie to absolute perfection. From Rizzo’s confident swagger, sharp tongue, and strong vocals; Daigle delivers in every category. Her singing of ‘There Are Worse Things I Could Do,’ is powerful and a real standout moment. Another Pink Lady that stands out is Katelyn Morgan as Jan, who while always eating something serves a full course performance.

As for the T-Birds, Nick Abbott as Kenickie has a big stage presence and seems to be the leader of the group. He also has his very own car, resulting in a fueled up rendition of ‘Greased Lightnin.’ For comedic relief, Digger Howard as Roger, is source of a number of laughs, and is always ready to drop his pants to make any night a full moon.

Other members of the supporting cast who excel is Rosa Garder as Patty, a spunky cheerleader who brings a lot of spirit to the stage. Her facial expressions and body language is more captivating than any pom-poms. Her swooning over Danny and left unable to speak in one scene is brilliantly funny. Quickly becoming a La Comedia favorite with past roles including Ursula in The Little Mermaid and Golde in Fiddler on the Roof is Leanne Acero, who makes the best out of every opportunity given as Ms. Lynch. Also, despite having just a few lines, Dan Mullanaphy is memorable as an awkward nerd named Eugene. He is able to do a lot, with little.

All the vocals in Grease are spot-on, especially ‘We Go Together,’ which is impossible to sit perfectly still through and is masterfully choreographed. Special mention must also be given to Joel Bauman for his soulful singing of ‘Beauty School Dropout.’

The scenery is top notch and the transitions are seamless. It’s a near perfect production of the original Broadway musical, which has some differences from the movie and recent televised live production. Grease continues through June 26, it’s a classic that should not be missed.

This American pop-phenomemon features the songs from the legendary soundtrack you by heart, such as Greased Lightnin', Summer Nights, Beauty School Dropout and We Go Together. Did we mention dancing? The super-charged choreography will have you doing the Hand Jive!
© 2022 Dayton Local. Unauthorized use and/or duplication of this material without express and written permission from Dayton Local is strictly prohibited. Excerpts and links may be used, provided that full and clear credit is given to Dayton Local with appropriate and specific direction to the original content.
Visit Website