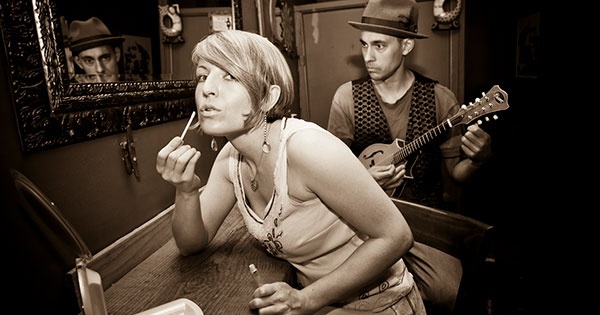 Strangled Darlings is a duo whose lyric driven music is backed up by George on a mandolin and Jess on custom tenor bass & foot drums.

Touring since 2010, they have released three full length albums and one EP. Strangled Darlings will be at the South Park Tavern on Thursday, August 10 at 10 p.m.

1. How would you describe your music in two sentences or less?

2. What is something you have learned in the past week?

I learned that Donald Trump doesn’t support transgender people in the military.

3. Who did you first see in concert?

The Who. Some initial reunion tour back before it was cool.

5. If you could open for any artist, who would it be?

We want to open for Courtney Barnett.

6. When was the last time you were nervous?

When I was answering questions for this reporter from Dayton Local. His questions made me feel like I was Sean Spicer swallowing my gum.

7.  While the writings of Faulkner have been an inspiration, what is the best book you have read recently?

“A Brief History of Seven Killings” by Marlon James. A fictionalized account of the assassination attempt on Bob Marley and the CIA’s involvement in destabilizing a poor, weak country it seemed to have confused with Cuba.

8. What’s a memorable moment that has happened while on tour?

Strangled Darlings was the impromptu wedding band for a pair of train hopping crusty punks as they read their vows & did home job tattoos on each other’s ring fingers. And yes, homeless/train hopper kids can organize small festivals on BLM land in central Oregon. It’s a west coast thing.

9. What song would be featured on the soundtrack of your life.

10. In the spirit of South Park Tavern, what do you like on your pizza?

Find out more about Strangled Darlings at strangleddarlings.com. Dayton Blues Festival
Events Calendar Featured Events
Follow Us
Dayton Local takes reasonable measures to ensure the quality and accuracy of the information on this page. Use of this site is at your own risk, and by doing so, you agree to our Terms & Conditions. You can report inaccurate, misleading or inappropriate information using the button below. Thank you.
© 2022 DAYTON LOCAL