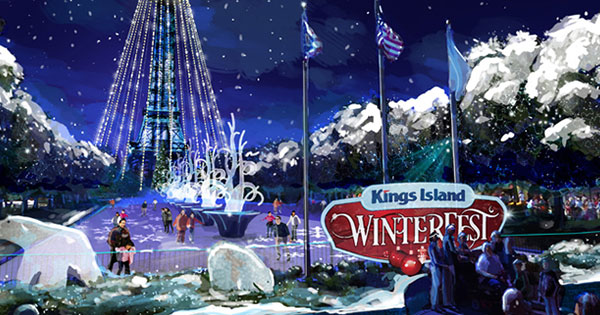 Imagine an old-fashioned winter…rosy-cheeked skaters, the magic of dazzling holiday shows, carolers, shops filled with ornaments, trinkets and toys, the aroma of freshly-baked treats and the spirit of everyone’s favorite season captured in an atmosphere of warmth and nostalgia.

For those too young to remember, Winterfest originally ran between 1982 to 1992, and then in 2005 for one season.  Winterfest returned to Kings Island again in 2017.

More than 50 unique holiday experiences for the entire family

During Winterfest, the iconic 314-foot tall Eiffel Tower will be converted into the "world's largest Christmas tree", decorated with thousands of lights which will be seen for miles.  Below the Eiffel Tower, International Street will be transformed into a colorful and quaint winter village, featuring the fun of holidays past with Christmas carolers, and homemade crafts.

This year Winterfest will feature ice skating on the Royal Fountain, rides including Mystic Timbers, millions of lights and holiday characters spreading merriment, like Jack Frost and Sugar Plum Fairy. Experience WinterFest’s excitement, all wrapped up in an atmosphere of warmth and nostalgia.