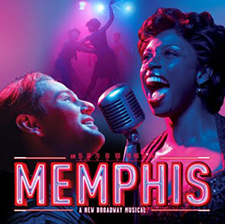 From the underground dance clubs of 1950s Memphis, Tennessee, comes a hot new Broadway musical that bursts off the stage.

Truth be told, I wasn’t very excited about going to “Memphis,” but it ended up being an absolutely wonderful trip. Ironically the reservations I had about it, mainly not enjoying the rhythm & blues/jazz styled music so heavily featured, is parallel to the plot. “Memphis” is the story of one man’s fight to get so-called ‘black music’ to be listened to by the white folk during the 1950‘s.

The hero of “Memphis is Huey Calhoun, a dim witted, disk-jockey played by Joey Elrose. Elrose is ‘fantastical’ in the role. Huey acts on heart alone, see’s no color, and is determined to make his starlet, Felicia, reach the mainstream. With a voice strong enough to break racial or any other barriers, Jasmin Richardson, is perfectly cast as Felicia. Her physical beauty as radiant as her voice. One of the joys of “Memphis,” is Huey, whose extremely likable with his unique and ‘Hockadoo’ attitude. He lacks the intelligence to read, but as the determination to make his dream of Felica’s music reaching the masses come true. You can’t help, but root for Huey as he rises out of the doldrums of poverty to become a number one rated radio personality.

Beyond the music, Huey and Felicia’s hearts are also in tune with each other. Their relationship is heavily challenged by society and particularly Huey’s mother (Pat Sibley), due to the mixture of races. The racial undertones of “Memphis” is emotionally presented and pulls at the audiences soul. A more free and opportunistic life awaits them in New York, but Huey’s heart is tied to “Memphis.”

As with all exceptional shows, a strong supporting cast is also present in “Memphis,” which features Jerrial T. Young as Bobby, whose doses of comic relief and spirited rendition of “Big Love” makes him a fan favorite. There’s also Delray, played by RaMond Thomas, the protective brother of Felicia. It’s in Basic Storytelling 101 that a character who doesn’t speak, will break their silence at a pivotal moment. Gator, who I believe was played by Kyshawn Lane on this night, hadn’t uttered a word in years, so I knew the time was coming, but I was still surprised when it occurred. The moment was perfect, one of the most moving scenes, and Gator’s voice proves to be precious to be silenced. Furthermore, the ensemble is dazzling with their array of dance moves.

The costumes, well minus Huey’s sense of fashion, are all impressive and the scenery is seamlessly transitioned from the studio of a radio station to an underground Blues bar and everywhere in between. All parts of “Memphis” are perfect, but it’s the story of how music unites the races and Huey’s relentless efforts to fulfill his vision that makes it a splendid. I guarantee “Memphis” is a trip you’ll never forget and if it doesn’t leave and song in your head you will at least leave saying, ‘Hockadoo!.”

“Memphis” continues at the Schuster Center through April 13. Go to www.ticketcenterstage.com to reserve your seat.

Turn up that dial! From the underground dance clubs of 1950s Memphis, Tennessee, comes a hot new Broadway musical that bursts off the stage with explosive dancing, irresistible songs and a thrilling tale of fame and forbidden love. Inspired by actual events, MEMPHIS is about a white radio DJ who wants to change the world and a black club singer who is ready for her big break. Come along on their incredible journey to the ends of the airwaves — filled with laughter, soaring emotion and roof-raising rock ‘n’ roll.
© 2022 Dayton Local. Unauthorized use and/or duplication of this material without express and written permission from Dayton Local is strictly prohibited. Excerpts and links may be used, provided that full and clear credit is given to Dayton Local with appropriate and specific direction to the original content. 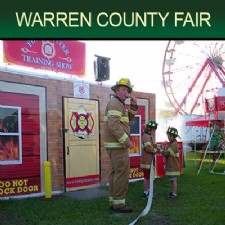 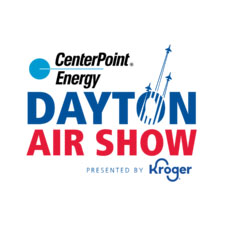