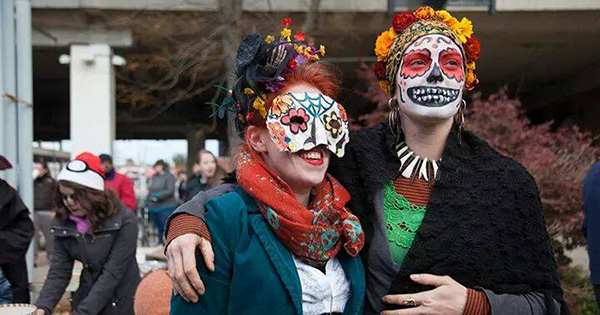 Day of the Dead - Come and celebrate Dia de Muertos and honor the lives of loved ones who have passed.

Day of the Dead Celebration & Parade in Dayton

The Dayton parade and celebration will include all of these traditional Mexican traditions with some unique Gem City twists. Expect more than a thousand people to attend this free and family friendly event. October 20th 2 - 8 PM.

2pm Gather for the Pre-Parade activities in Downtown Dayton at E. Fifth Street and Jefferson 45402. There will be expert face painting for the parade, the NEW Dayton Dia De Muertos T-shirt will be for sale and yummy food trucks will be there.

4pm The Dayton Dia De Muertos Parade departs and travels east down the middle of Fifth Street through the Oregon District in Downtown Dayton to the Celebration at Missing Peace Art Gallery 234 S. Dutoit St. (at E. 5th). We are excited to have representatives from the Dayton Ballet participating in our parade this year! The Dayton Ballet is preparing their world premiere ballet Dia de los Muertos as part of Phantom Dances! The performance opens 24 October, and runs through the 27th. .

5pm arrive at Missing Peace and the celebration begins (until 8pm) which includes: The authentic Mexican folkloric Dia De Muertos dancers from ORGULLO MEXICANO, traditional rancheros from the father and daughter singing team of LESLIE PEREZ AND THE ALACRAN DE DURANGO, then an appearance of Dayton's own famed and mysterious original Lucha mask wearing rockers TEAM VOID (Lucha being the mask wearing Mexican wrestlers). REV. COOL of WYSO's Around the Fringe show will MC the event and DJ high energy traditional and not so tradition Latin dance beats between sets and to end up the evening.

Traditional homemade Mexican food will be provided by the families of St. Mary's Church on Xenia Ave in Dayton. El Meson's food truck will also be there serving up goodies.

Traditional Dia De Muertos ofrendas (alters) will also be on display. Mark Breuninghaus of The Flower Shoppe donating traditional marigolds for the ofrendas again, as they have every year since our inception. The NEW Dayton Dia De Muertos T-shirt will be for sale and stickers will be available.

Dayton Dia De Muertos is honored to have been selected as one of the beneficiaries of the Novemebr 2019 Dayton Bookfair! With the addition of this funding, we plan to increase our educational outreach in 2010 and for future Dayton Dia de Muertos celebrations!

Broadway in Dayton: RENT at the Schuster January 21-26
More News