Review: A Christmas Carol at Lacomedia 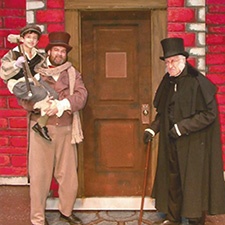 A Christmas Carol at Lacomedia Dinner Theatre is sure to help make this holiday season a joyous one.

Review: A Christmas Carol at Lacomedia

Let’s start with a game, it’s really simple, and is called ‘Yes or No.’ I’ll ask some questions, which you answer with either a Yes or a No.

If you answered ‘Yes,’ to one or more of those questions, the musical version of the Charles Dickens classic A Christmas Carol at La Comedia through December 31 is a can’t miss. Attending the production will also allow for the playing of another round of ‘Yes or No,’ as if any further additional reasons were needed.

Everyone knows the story of A Christmas Carol, in which the ghosts of Christmas Past, Present and Future visits Ebeneezer Scrooge resulting in him having a whole new outlook on life. However, the talent of the entire cast provides a freshness that makes seeing the show like a whole new experience. From George C. Scott to Michael Caine and everyone else who has ever played the role of Scrooge, none has played the grumpy curmudgeon any better than the human chameleon Chris Kramer. Kramer transforms himself to masterfully portray a wide range of characters for La Comedia, he is always a joy to watch and this performance is no different. His utterances of “bah humbug” are even perfect.

While on the subject of Kramer, in all honesty, without any journalistic hyperbole, a highlight of my holiday season has become the traditional singing of “O’ Holy Night’ at La Comedia. Not only does Kramer give a splendid performance as Scrooge, he raises the bar of excellence even higher with a pitch perfect rendition of the song. Much like Scrooge becomes generous, Kramer spreads the wealth of his blessed voice providing a beautiful gift. With all due respect to the sweet potato soufflé, Norwegian Cod (mixed in a premium beer batter), and the Papaya Chutney Dressing, nothing leaves a better taste in your mouth than the night concluding with this rendition of “O’ Holy Night.’

One of the most endearingly sympathetic characters in history is Tiny Tim as you can’t help but feel for the big-hearted boy who relies on a crutch to get around. The role is played Sam Kingrey who pulls at your heartstrings and has a stage presence that exceeds his tiny frame, by far. The relationship that Tiny Tim shares with his father, Bob Cratchit (David Goins) is especially moving.

I was also highly impressed by the haunting presence of Jacob Marley’s ghost, portrayed by Mark Reuter. The costuming and sound effects were perfect for the character, and nearly had me as frightened as Scrooge. Though the Ghost of Christmas Present (Todd Tucker) was made to closely resemble the Burger King, but the only Whopper he delivered was the news to Scrooge about how others felt about him; all the other visuals were splendid, including Karie-Lee Sutherland as the Ghost of Christmas Past.

Are you still questioning whether or not to attend? The winning answer should be ‘No,’ with the prize being seeing the spectacular production of A Christmas Carol, which is sure to help make this holiday season a joyous one.