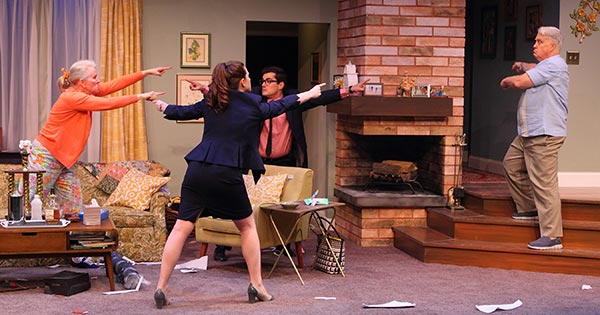 Nobody who purchases a ticket for The House will suffer from buyer’s remorse.

“There’s no place like home,” is known for being said by Dorothy in The Wizard of Oz, but it holds even truer to the Redmond’s in The House. A hilarious comedy, The House is about an older couple who are deeply attached to their home and struggling to hand it over to the new buyers. It’s a fun-filled 90 minutes with one laugh after another. There might not be two consecutive lines of dialogue from beginning to end without a punchline. Nobody who purchases a ticket for The House, at The Loft through November 19, will suffer from buyer’s remorse. 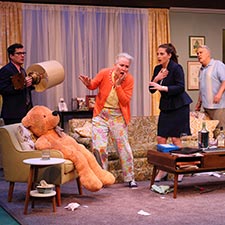 With their children off to college, Martyn (Scott Stoney) & Shanny (Caitlin Larsen) Redmond are downsizing to a condo. They believe that Fischer (Vince Gatton) & Lindsay (Alex Sunderhaus) Libett are the perfect couple to take over their home and continue the tradition of raising a family within it. It’s made abundantly clear that the Redmond’s have a deep-rooted love for their home and departing is the source of great sorrow. Their only comfort is the belief that the Libett’s won’t make any major changes to the residence and its history of memories.

The first part of The House consists of nervous chatter between the two couples, which gets a little nutty, literally. The talented cast makes it all a pleasure to watch. Stoney, a legend in Dayton theatre, pulls out a lot of laughs as Martyn, who is a dentist. You might need some novacaine for a sore mouth from laughing so much after seeing the show. Stoney has a perfect mate in Larsen, as his wife Shanny. Their chemistry together is a formula that spontaneously combusts into hilarity. Larsen gives her all in the performance, including a tooth.

Their counterparts are equally impressive, as while the tension rises so does the quality of Gatton’s and Sunderhaus’ performances. They are both at their best after their cheerful facades are broken down. Gatton even excels at potty humor and the beauty of Sunderhaus withstands being marked by a cat with diarrhea.

A highlight of the show is the physical comedy that all four cast members portray, in both fits of rage as well as passion. Speaking of passion, there is a teddy bear that gets caught right in the middle of it. The show does hit on a number of hot button topics; including religion, homosexuality, mental health, and racism. They are all dealt with in good humor and everyone is too busy laughing to be offended.

To receive a full supply of laughs, see The House at The Loft. 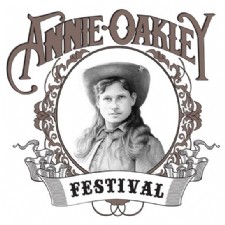