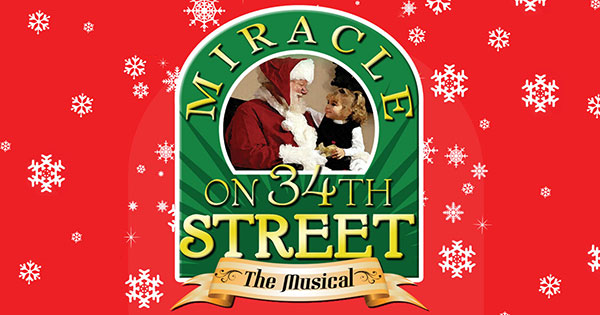 It’s the season of giving and La Comedia Dinner Theatre obliges by essentially offering two shows on the same night (or matinee) for the price of one.

It’s the season of giving and La Comedia Dinner Theatre obliges by essentially offering two shows on the same night (or matinee) for the price of one. Both touch the heart and fill you with the warmth of the holiday spirit. The featured attraction is ‘Miracle on 34th Street,’ followed by the traditional singing of ‘O Holy Night’ by Dustin Farris, whose back for the sixth straight year to perform his rousing rendition.

Seriously, without hyperbole, the singing of ‘O Holy Night,’ by Farris has become one of my favorite holiday traditions. My anticipation for it, which begins in about April, is similar to that of a child on Christmas morning. Farris sings it with such emotion that it rattles your soul. There’s no need to turn that radio dial, shuffle your iPod or however you listen to Christmas music these days as you won’t find anything as gratifying as Farris singing ‘O Holy Night’ and it can only be heard at La Comedia.

You should already be making your reservations, and I haven’t even began to cover the main event, ‘Miracle on 34th Street,’ the musical version of the classic film. It takes something really big to override the news of Kim Kardashian’s backside, like Santa Claus taken to court for his sanity to be judged. Santa Claus or Kim Kardashian’s rump, at least one of them is real. You decide! Thankfully only the issue of Santa is dealt with in ‘Miracle on 34th Street.’

With a name like Kris Kringle, there’s no job more fitting than to be Santa Claus, not at the Dayton Mall but at Macy’s in New York City. There’s always something magical about Chris Kramer when he’s on stage, so its appropriate that he play Santa (Kris Kringle). What he lacks in belly size, Kramer makes up for with charisma to fill the weight of the role.

The story also revolves around Doris (Blaire Baker) and her daughter, Susan, who wants to believe in Santa despite her mother’s wishes. The role of Susan is split between Haley Iverson and Ashley Ortel, on the night I attended whichever one of  the young actress that was on expressed talents that are way beyond her years. All Susan wants for Christmas is for her house to be made a home by her mother pairing with Fred (Michael Karraker). It’s always a gift to see Karraker on stage as he never fails to deliver a top rate performance. You’ll be rooting along with Susan to see her wish be made true.

A real scrooge, Mr. err Dr. Sawyer is convinced that Kris Kringle is a lunatic and wants him locked up. He stoops really low in his attempt to prove that Santa isn’t real. Colin Cranstoun is insanely good as Mr. err Dr.Sawyer, its to his credit that such a mean spirited character can be so liked. His performance during the trial, nursing his ‘injured arm’, is especially entertaining.

Special mention must also be given to Martha Simmons, who as Miss. Shellhammer steals her scenes, or at least my attention, with her exaggerated walk and charming beauty. Also Korey Harlow as the bailiff (Finley) provides much of the comic relief in making the most out of a small part.

Don’t miss the opportunity to experience the joys of the Christmas season in a double feature as ‘Miracle on 34th Street’ continues at La Comedia through December 31.

November 5 - December 31, 2014 at La Comedia Dinner Theatre. The story of the real Santa Claus, Miracle on 34th Street is one of the most beloved holiday films of all time. This touching musical version of the holiday classic proves that miracles do happen and is sure to fill both the young and the young at heart with the Christmas spirit.
© 2022 Dayton Local. Unauthorized use and/or duplication of this material without express and written permission from Dayton Local is strictly prohibited. Excerpts and links may be used, provided that full and clear credit is given to Dayton Local with appropriate and specific direction to the original content.