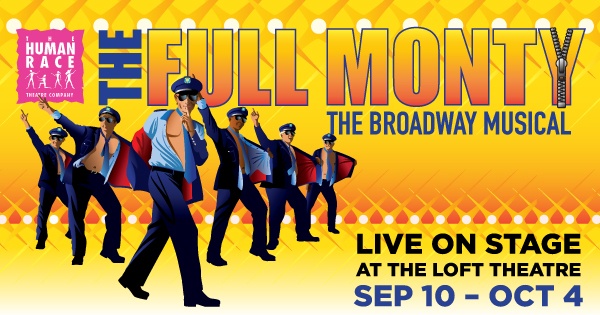 In need of quick cash and low on prospects, six unemployed Buffalo steelworkers come up with the outrageous idea - to put on a strip act, go ''The Full Monty'' and bare it all!

I’m no expert in the field, but it’s my conclusion that the men of The Full Monty can take pride in the fact that they have no shortcomings. Every single aspect of their performance surpasses expectations, granted there are certain ‘parts’ I examined less than others, but as a whole their measurements are very high (way above average).  The Full Monty provides a most revealing look at a group of unemployed men who bare more than their souls in the hilarious musical at The Loft through October 4.

Personally, the 1997 film version of The Full Monty was a disappointment, largely because of the English dialect, but the Americanized musical is a vast improvement. The storyline is essentially the same as a factory closes, leaving many of the area men out of work. Among them is Jerry (Christopher DeProphetis), who’s behind in child support payments and is at risk of losing visitation rights of his son. Desperate for some quick cash, Jerry devises a plan for a group of common men to act as strippers. DeProphetis is excellent as Jerry, always rising to the occasion for whatever the role requires. From comedy to drama, he hits the target in every range, and exposes a terrific voice, among other things.

An equal standout is Matt Welsh as Dave, who embodies the ‘common man’ and knows he’s not the stripper type. Dave is slightly overweight, out of shape, and lacks much self-esteem, which is effecting things with his wife. Most importantly though, he is Jerry’s best friend, who he can’t say ‘no’ too, no matter how hard he tries.

The assembled crew of dancers also includes Malcolm (Matt Kopec), a dim-witted, pigeon chested, momma’s boy whose life gets saved by the chance to be part of the team. Ethan (Josh Kenney) who repeatedly fails in his attempts to walk up the walls, but what he lacks in skills, he makes up for in…size. The straight laced Harold, is played by Jamie Cordes, who doesn’t want his wife to know he’s out of work. Harold has a golden tan, but his complexion pales to the shades of inner torment that Cordes displays within the character. Last, but certainly not least the scene stealing Richard E. Waits as ‘Horse.’ The name really does say it all, or does it? One of the funniest scenes is the auditions, where ‘Horse’ is introduced and he brings down the house with ‘Big Black Man.’

Many laughs come from the groups attempts to somehow form into a cohesive dance unit as their agility, sense of rhythm and ability to take off their belts are all lacking. The Full Monty is a masterful comedy, but it also has the gift of some heart wrenching drama. It’s somewhat ironic that the show centers around stripping, because it’s really about looking into the inner layers of man, and the struggles they face when unable to provide for their loved ones. Each of the men are looking to redeem their self-worth by showing all of themselves, literally.

The women are also captivating in their roles, particularly Jillian Jarrett (Pam), as Jerry’s ex-wife, and Leslie Goddard (Georgie), who plays Dave’s wife. Each bring extra layers of depth and beauty to their roles. Deb Colvin-Tener also adds to the fun as Jeanette, who accompanies the guys on the piano. Her one=liners are in as good of tune as her piano. There’s also Vicki (Sonia Perez), Harold’s wife, who shows she loves the man, not his riches. The entire ensemble is superb, each filling a number of different roles, especially Scott Stoney and his audition to be a stripper. It’s a routine that will leave you wanting more, but only for the laughs it brings.

Special mention must also be given to Matt Kopec (Malcolm), who Wow’s the audience with his…voice. (What? You were expecting something else) His singing of ‘You Walk With Me’ in a moving scene is superb and full of emotion.

Also, as a relative newcomer to The Loft, I was really impressed by the staging and scenic design in The Full Monty. The two previous shows I’ve attended both used just one set, but The Full Monty had several and used the spinning stage. All the transitions were made quickly and seamlessly.

The use of a live band, hidden but heard, is also a valuable asset to the production.

Warning: The opening scene includes a male stripper performing, and may have you thinking, ‘what did I get myself into?’ Or if you are woman, will probably be searching for dollar bills. Either way, relax, it will simmer down. Just be sure that Grandma brings her heart medicine.

Men and women alike, will thoroughly enjoy The Full Monty and will be left wanting more even though the cast does give all of themselves. Without giving too much away, I must also applaud the lighting crew for their perfect timing, a lot, especially for ‘Horse’ and my comfort level was dependent on them. The Full Monty continues through October 4, you won’t be disappointed.

In need of quick cash and low on prospects, six unemployed Buffalo steelworkers come up with the outrageous idea to put on a strip act after seeing the local women’s wild enthusiasm for touring Chippendales dancers. Short on time and with little talent or physical appeal, the gang promises their show will be better because they’ll go “the full monty” and bare it all! As they prepare for the big night, they learn to let go of their doubts and insecurities—and their clothes—in this hilarious adaptation of the hit film. This production contains adult language, situations and male nudity. For mature audiences only.
© 2022 Dayton Local. Unauthorized use and/or duplication of this material without express and written permission from Dayton Local is strictly prohibited. Excerpts and links may be used, provided that full and clear credit is given to Dayton Local with appropriate and specific direction to the original content.
Visit Website Facebook Twitter 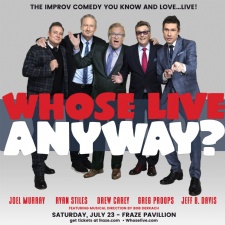