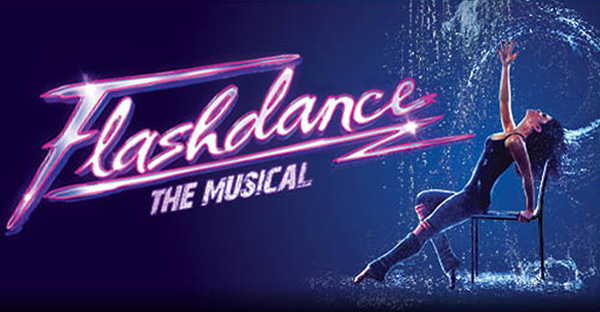 The pop culture phenomenon of FLASHDANCE live on stage - at The Schuster!

Though often expected, it’s rare that I ever actually leave a musical with the songs stuck in my head. However, the expectations were met by “Flashdance-The Musical,” as all the way home, and into the night I kept singing the whole collection of hit songs from the show. Plus, and perhaps the most impressive of all, the music is just an addition to the spectacular dancing featured in the show. “Flashdance-The Musical,’ provides a sensory overload of pleasure that leaves an engraved impression upon your soul.

The eighties, arguably, provided more great movies than any other decade. (Still waiting on “Breakfast Club-The Musical) Admittedly, the 1983 film wasn’t even on my radar, but now I do want to see it. (Where’s a Blockbuster when you need it?)  I would probably be disappointed though, as I’m certain the cast could be no better than those in the stage production. Not to be cliché, but in the lead role of Alex Owens, Karli Denardo is a ‘Maniac.’ Her dancing is so electric, each movement radiates enough passion to start an intensely burning fire. Plus, in her little outfits, Denardo is HOT, even with leg warmers.

While working in a steel mill, Alex dreams of being a dancer, and performs on stage at a bar during the night. Her worlds are brought together by Nick Hurley (Adam J. Rennie), her wealthy new boss at the mill, who admires more than her work ethic. Hurley desires a romantic relationship with Alex and encourages her to her pursue her dreams of dancing and audition for a prestigious academy. ‘Flashance’ is really the story of Alex overcoming personal obstacles to chase her dreams in the world of dance.

Due to Denardo’s performance as Alex, I could be deaf, (which I seem to be sometimes when the wife asks me something) and still enjoy the show. Her expressions and movements, tells the story. Her flexibility and stamina are to be admired, as she pours every ounce of energy into each routine. Just watching Denardo left me breathless and in awe of her tremendous talent. A highlight and an image still frozen in my mind is when the water splashes down on her reclined body. It’s done perfectly and provides a visual mouthful.

A strong supporting role is given by Heidi Friese as Gloria, who also has dreams of stardom and is tempted to take a dangerous path to reach it. She is endearingly charming and lives up to the esteemed reputation of the song for which her character is named. No matter what Gloria is or isn’t wearing, you can hardly keep your eyes off her. Both the song and the actress stick with you, long after the final curtain.

To be able to dance well is a talent, to sing and dance is a blessing. In addition to Denardo and Friese, an incalculable amount of goodness was also showered upon Brianna-Marie Bell (Kiki) and Danielle Marie Gonzalez (Tess), whose steps and voices were always right in tune. Their outfits are glitzy, often revealing, but their vocals triumph all. Nothing is on display more than the women’s precision in dance and song.

Speaking of the music, ‘Flashdance,’ is from when MTV actually played music videos rather than serialized teen dramas and reality shows. The movie connected to the MTV viewing audience with its music, featuring hits like ‘Maniac,’ ‘I Love Rock N Roll,’ ‘Gloria,’ and ‘What A Feeling.’ It’s impossible to not at least tap a foot during each of the numbers.

I must also make special mention of Jimmy (Jacob Tischler), whose jokes may fall a little flat, but his performance hits every note. It’s a rather small part, but he makes it big, with excellent…timing. (You have to see it, to get the joke). His romance with Heidi is sweet and their singing of ‘Where I Belong’ is a standout, as is his solo of the same song.

The closing scene is an emotional powerhouse, with Alex’s dancing doing all of the talking as she dances for her audition into the Academy, while ‘What A Feeling’ plays in the background. Will her dreams be made true? I won’t spoil it, in case you don’t know from the movie, but will say that Dinardo creates a theatrical masterpiece.

‘Flashance-The Musical,’ continues at the Schuster Center through January 25.

The pop culture phenomenon of FLASHDANCE live on stage - at The Schuster!  With electrifying dance at its core,FLASHDANCE – THE MUSICAL tells the inspiring and unforgettable story of Alex Owens, a Pittsburgh steel mill welder by day and a bar dancer by night with dreams of one day becoming a professional performer. When romance with her steel mill boss threatens to complicate her ambitions, Alex learns the meaning of love and its power to fuel the pursuit of her dream.  FLASHDANCE – THE MUSICAL features a score that includes the biggest hit songs from the movie, in addition to 16 brand new songs written for the musical with music by Robbie Roth and lyrics by Robert Cary and Roth.  FLASHDANCE-THE MUSICAL features a book by Tom Hedley (co-writer of the original screenplay), and Robert Cary with direction and choreography by Sergio Trujillo (Jersey Boys, Memphis).

The Dayton Art Institute 'Museums on Us' Program
Events Calendar Featured Events
Follow Us
Dayton Local takes reasonable measures to ensure the quality and accuracy of the information on this page. Use of this site is at your own risk, and by doing so, you agree to our Terms & Conditions. You can report inaccurate, misleading or inappropriate information using the button below. Thank you.
© 2022 DAYTON LOCAL