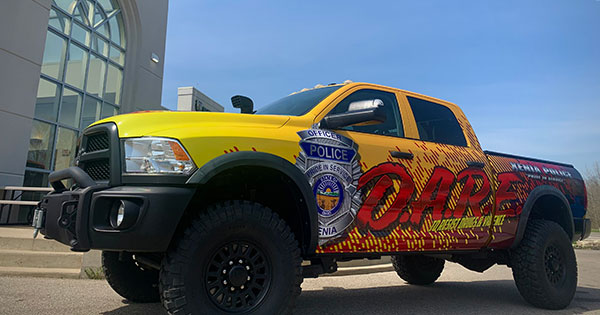 There’s a new member to the Xenia Police Division’s fleet, and it’s turning heads all over town.

There’s a new member to the Xenia Police Division’s fleet, and it’s turning heads all over town. The Division’s new DARE vehicle is a 2016 Dodge Ram which was donated from Key Chrysler. Its one-of-a-kind design is meant to catch the public’s eye with its bright yellow paint job and colorful decals. “It brings a lot of attention, which is what we want, so people are aware of what we’re trying to do,” said Xenia Police Division DARE Officer Jacalyn Masur. 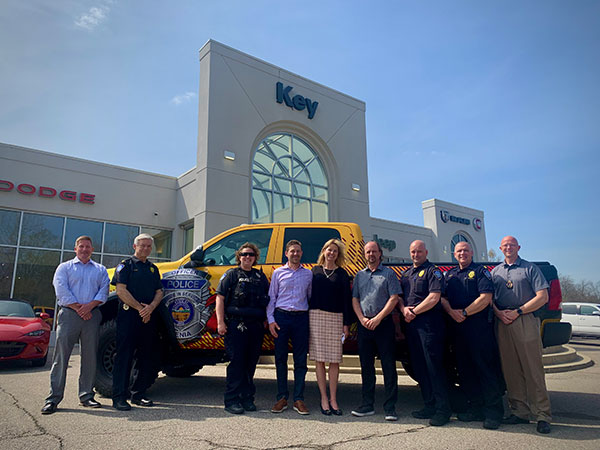 Key Chrysler, located along N. Detroit Street, generously donated the prior DARE truck to Xenia Police and stepped up to help again. “We’ve been part of the community for 47 years now, so we take the community involvement and community support seriously,” said Chris Tobey, president of Key Chrysler. Tobey added that while his dealership is glad to play a role, it is not looking for recognition. “The DARE program- I can’t think of a better thing to support, than keeping kids off drugs. We’re happy to be involved.”

Cruisers, a local company that has been customizing cars and trucks since 1992, added the truck’s sirens, under lights and bed cover. The truck was then handed over to DanCo Lettering to add the colorful decals and Xenia Police Division logo. “It’s eye-catching and that’s what you want for the DARE program, you can’t miss it driving down the road,” said Tobey.

When Officer Masur first pulled up to Xenia Community Schools in the new truck, she reports that the students were impressed. “All the kids like it, too; there’s hundreds of questions about it, ‘what’s in it, why’s it so big, what’s the filter on the top, if it can tow things.’” The truck is large and Officer Masur said she’s getting used to driving a larger vehicle, “I definitely have to pull myself up and be careful getting down,” she said.

The Xenia Police Division will have the truck for three years and will then sell it back to Key Chrysler for one dollar. “We just want to be there for what the City needs, and for the kids,” Tobey said. 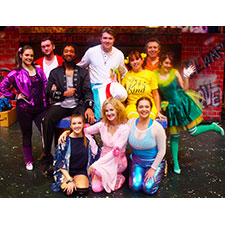