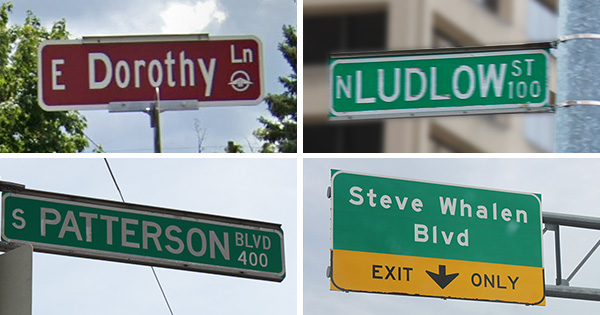 What's in a Dayton street name? From Alex-Bell to Watervliet, we reveal the history and the people behind familiar, yet curious street names around Dayton.

Have you ever looked at a street sign and wondered where the name came from? We reveal the history and the people behind some familiar, yet curious street names around the Dayton area.

Brown Street is named after Thomas Brown, a brick maker who arrived in Dayton in 1828.  His brickyard was located at the east side of Brown Street close to the center of the Oregon Historic District.

Burton Avenue off N. Main in Dayton is named for Ohio Senator Theodore Burton (1851-1929).  Burton was known for his work in preserving Niagara Falls, and for his opposition to wasteful waterways projects.

John H. Patterson, founder of National Cash Register Company (NCR) had a daughter called Dorothy, who loved to ride her horse along a dirt path that Patterson affectionately called "Dorothy's Lane". The rest, as they say, is history.

Far Hills Avenue got its name from the "The Far Hills" estate, land originally owned by John H. Patterson's paternal grandfather Colonel Robert Patterson. In 1895, John H. Patterson used part of his fortune to build a home on the outskirts of Dayton. That home included a gate lodge at the Oakwood Ave. / Lebanon Turnpike (now Far Hills Ave.) intersection.

Forrer Boulevard in Kettering is named for Samuel Forrer (1793-1874), a civil engineer who was instrumental in the building of the Miami-Erie Canal in Dayton. Forrer is buried at Woodland Cemetery.

James H. McGee (1918-2006) was a civil rights attorney, and served as the first African-American (and longest-tenured) mayor of Dayton.  In 1988, Western Avenue in Dayton was renamed "James H. McGee Boulevard". McGee is buried at Woodland Cemetery.

Ludlow Street in downtown Dayton is named after Israel Ludlow (1765-1804), a government surveyor who helped found the city of Cincinnati, and who in 1795, along with Governor Arthur St. Clair, Jonathan Dayton, and William McMillan also helped plan Dayton, Ohio.

Schantz Avenue is named after local brewer Adam Schantz, Sr. (1830-1903). Schantz, a German immigrant, founded the Riverside Brewery with his brother in 1882, and later became a partner in several local breweries. Schantz wanted to turn land he owned in modern-day Oakwood into a desirable residential district.  Although he did not live long enough to see it, that development is what we now know as the Schantz Park Historic District. Schantz is buried at Woodland Cemetery.

Shakertown Road runs past the location of the former Watervliet Shaker Village (1806-1900).  You'll find a historical marker near County Line and Research that explains the community was named for the first Shaker settlement in New York of the same name.

Shroyer Road is named for John Shroyer (1794-1876). Shroyer moved to Ohio from Maryland in 1810, and was an early settler in the Dayton area, with more than 400 acres at the heart of modern day Oakwood. John Shroyer and his wife Elizabeth are buried in David's Cemetery.

Despite the apparent misspelling, Spinning Road in Riverside is believed to be named after Isaac Spining (1759-1825).  Spining was a Colonel in the Revolutionary War, and later became a Judge in the early years of Dayton. Spining is buried at Woodland Cemetery.

St. Clair Street is named for General Arthur St. Clair (1737-1818), who was made governor of the Northwest Territory in 1788, including the portion that would become Ohio.

On March 21 1991, while attempting a traffic stop on Xenia Avenue, Dayton police officer William Steven Whalen was shot and killed in the line of duty with an AR-15 rifle. In 1992, the former Hamilton-Wyoming Connector was renamed Steve Whalen Boulevard in his honor. Steve Whalen was 38 years old.

Watervliet Avenue is named for the same Watervliet Shaker Village community as Shakertown Road - scroll back up if you missed it!

Wayne Avenue is named after "Mad" Anthony Wayne (1745-1796), a US Army general and statesman. In 1794, his forces defeated the Western Confederacy at the Battle of Fallen Timbers, a decisive victory for the U.S. forces ending the war. Other local tributes to Wayne include the former Wayne Township, Mad River Rd, Mad River Township, and the village of Waynesville, Ohio.

Zeigler Street, which connects S Patterson with S. Perry is named after David Zeigler (1748-1811), a German immigrant who served in the U.S. military, and became the first mayor of Cincinnati. Zeigler is buried at Woodland Cemetery.