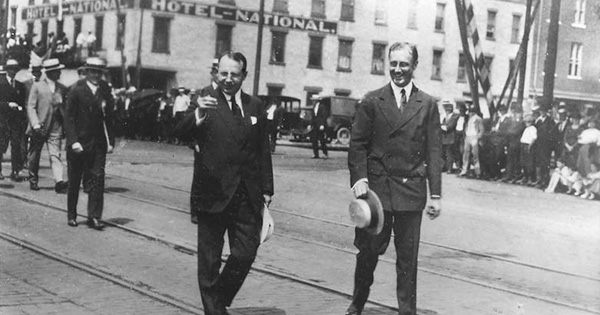 Running on a ticket with future President Franklin D. Roosevelt as his running mate, Gov. Cox returned to Dayton on August 7th, 1920 to accept the nomination of his party.

Gov. Cox had started his newspaper empire by purchasing the Dayton Evening News, renaming it the Dayton Daily News, so it was only fitting that he would return to Dayton to accept the nomination of his party.

To help his campaign, Cox had chosen Franklin D. Roosevelt as his running mate, who had come along for the occasion.

When Cox arrived he was told that there would be a parade in his honor.  But instead of watching from the sidelines, both he and Roosevelt led the parade, marching from the Soldiers’ Monument on Main Street to the Fairgrounds. Once there, Cox watched as the parade made its way around the race track. (The above photo shows James M. Cox and Franklin D. Roosevelt near Main and Sixth streets as they make their way to the Fairgrounds in Dayton on August 7, 1920.)

Despite the heat, over 60,000 people joined in the celebration, carrying banners that said “Our Friend in Ohio Will Be Our Friend in the Nation”. Delegates came from as far away as Wisconsin to show their support. The parade itself consisted of over 20,000 people and took over an hour and a half to pass by the spectators lining the streets.

The next day the Dayton Daily News reported that Gov. Cox’s speech that day “absorbed all by its force and directness”.

Gov. Cox would lose to Harding that November. Harding’s victory (60.3% to 34.1%) remains the largest popular-vote percentage margin in presidential elections.

FDR went on to become our 32nd president and was the only president elected to 4 consecutive terms. He died on April 12, 1945 only eleven weeks into his 4th term. Harry Truman then became the nations 33rd president.

Congress passed the 22nd Amendment to the Constitution in 1951 placing a 2-term limit on the office of President. Dayton Salsa Project at Riverscape
Events Calendar Featured Events
Follow Us
Dayton Local takes reasonable measures to ensure the quality and accuracy of the information on this page. Use of this site is at your own risk, and by doing so, you agree to our Terms & Conditions. You can report inaccurate, misleading or inappropriate information using the button below. Thank you.
© 2022 DAYTON LOCAL