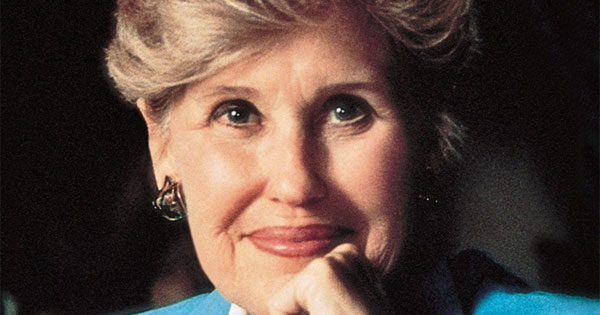 Erma Bombeck's recipe for writing a good column, "Hook 'em with the lead. Hold 'em with laughter. Exit with a quip they won't forget."

One of Dayton’s most beloved natives was born Erma Louise Fiste on February 21, 1927. Erma was a voracious reader and eager student. She contributed to Emerson Junior High’s newspaper, The Owl, as well as to Patterson Vocational High Schools’ paper. At just fifteen, she got a job as a copygirl with the Dayton Herald. After 3 years as a copygirl, the Dayton Journal-Herald hired her as a full-time writer, producing mostly obituaries. Eager to attend college, after graduation in 1944, Erma worked two full-time jobs to save money for college.

A year later, Erma enrolled at Ohio University. She struggled at OU, receiving rejections for every article she submitted to the school paper and barely passing first-semester freshman composition. What would she do with her life if she couldn’t write? Determined to prove herself, Erma enrolled at the University of Dayton. During her sophomore year at UD Brother Tom Price spoke the words that would redeem and sustain her, “You can write,” he said, “you can write.”

Following graduation in 1949, Erma returned to Dayton’s Journal-Herald, assigned to the women’s section. Longing to be promoted to the “city side”, Erma gave her best to every assignment. It was during this time that Bill Bombeck returned from Korea and eventually, the couple was married.

In 1952, Erma returned to writing humor in a column dubbed “Operation Dustrag”. Household absurdities soon found their way into the newlywed’s column. Editors were skeptical of her attack on homemaking. On the other hand, during WWII millions of women filled the workplace, 75% married, many with young children. Erma’s first columns struck a chord with them.

For a year after her daughter Betsy was born, Erma was a full-time wife and mother. When Dayton Shopping News offered an editing job, she eagerly accepted. Several years and two sons later, Erma approached Ron Ginger, editor of the Kettering-Oakwood Times with an offer to do a column. For $3 a week, they had a new column.

Eventually, Dayton Journal-Herald editor Glenn Thompson spotted her column, offering to increase both workload and pay: $50 a week for 2 columns. Thompson then sent a few of her columns to the Newsday Newspaper Syndicate. Only 3 weeks after first appearing in Dayton’s Journal-Herald, Bombeck signed a short term contract and by the end of year one was syndicated into 38 papers. “At Wit’s End” appeared in 500 papers in 1969 and 900 by 1978. In due course, Bombeck wrote 13 books, was tapped to write for several magazines, contributed to Good Morning America for 11 years, and was involved in the creation of 2 television series.

Erma was appointed to the President's National Advisory Committee for Women in 1978 for the final implementation of the Equal Rights Amendment. Bombeck traveled to almost every state where the battle for the ERA raged. In her book Erma Bombeck: Writer and Humorist, Lynn Hutner Colwell writes, “Erma believed in true equality, that no matter how you spend your life, you deserve recognition and acceptance and that the contribution you make to society by caring for your family should be considered equal to that made by anyone working at a job with regulated hours and pay.” Unfortunately, ERA failed.

Erma would later lament, “We've got a generation now who were born with semi-equality. They don't know how it was before, so they think, this isn't too bad. We're working. We have our attaché cases and our three piece suits. I get very disgusted with the younger generation of women. We had a torch to pass, and they are just sitting there. They don't realize it can be taken away. Things are going to have to get worse before they join in fighting the battle.”

The Erma Bombeck Writers’ Workshop and Writing Competition are held every two years (even years) by the University of Dayton and Centerville Public Library.

Erma was a breast cancer survivor. She passed April 22, 1996, from complications of a kidney transplant received to treat polycystic kidney disease and is buried at Woodland Cemetery.

Solar-Powered Dayton Native, Sunny-Side Up loves people-critters-pizza-beer & laughter. Ask her how your biz or event can be featured on the #1 site for #Places2Go & #Things2Do in Dayton 937-545-5478
Find more posts
MORE NEWS

Dayton Jazz Festival 2022
Events Calendar Featured Events
Follow Us
Dayton Local takes reasonable measures to ensure the quality and accuracy of the information on this page. Use of this site is at your own risk, and by doing so, you agree to our Terms & Conditions. You can report inaccurate, misleading or inappropriate information using the button below. Thank you.
© 2022 DAYTON LOCAL