2020 Dayton Holiday Festival to transform into drive-thru
Log In 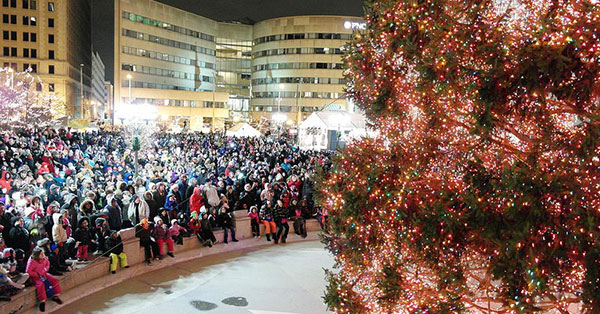 The 2020 Dayton Holiday Festival to kick off with televised tree lighting and drive-thru parade.

The Grande Illumination will air on WHIO-TV Friday, Nov. 27, and a drive-thru parade held Saturday, Nov. 28

In its 48th year, the month-long Dayton Holiday Festival, presented by DP&L, will return to celebrate the holiday season with some necessary changes to keep our community safe. The Dayton Holiday Festival will not gather guests in downtown Dayton for a tree lighting and traditional parade, but kick off with a televised Grande Illumination on Friday, Nov. 27, at 7 p.m. on WHIO-TV Channel 7 followed on Saturday evening with a Dayton Drive-Thru Children's Parade in Lights on Saturday, Nov. 28 from 6 p.m. to 10 p.m. in downtown Dayton.

Instead of gathering in a large crowd, the Dayton Holiday Festival Committee hopes to continue Dayton traditions in a way friends and families can safely celebrate together, while keeping the health and safety of the community in mind.


“We want to continue to bring holiday joy in our community and we have worked hard to come up with a creative way to continue some of the most cherished holiday traditions in the Dayton community with the Dayton Holiday Festival,” said Sandra K. Gudorf, president of the Downtown Dayton Partnership. “Thanks to the ingenuity and dedication of our Dayton Holiday Festival team, we’ve reimagined our traditions in a safe way that we hope our community can celebrate two magical nights of holiday spirit with us.”

Mark your calendars to tune in to the tradition of lighting the larger-than-life holiday tree on Courthouse Square during a special 30-minute broadcast that will air on WHIO-TV, Channel 7 beginning at 7 p.m. on Friday, Nov. 27. The partnership with WHIO will showcase musical entertainment from some of the area’s top performers, a look into area holiday traditions, and several surprises.

The following evening, on Saturday, Nov. 28, from 6 p.m. to 10 p.m., Main Street in downtown Dayton will transform into the Dayton Drive-Thru Children’s Parade in Lights. Spectators will slowly pass through several blocks of downtown streets in their own vehicles, getting an up-close view of the lineup of festive floats, holiday entertainment, and hundreds of thousands of lights that will be on display along downtown Dayton’s Main Street.

Details of the Dayton Drive-Thru Children’s Parade in Lights, and the holiday traditions that will continue through the month of December, will be available in the coming weeks on the Dayton Holiday Festival website.

Out on 5th - downtown Dayton
Events Calendar Featured Events
Dayton Local takes reasonable measures to ensure the quality and accuracy of the information on this page. Use of this site is at your own risk, and by doing so, you agree to our Terms & Conditions. You can report inaccurate, misleading or inappropriate information using the button below. Thank you.
© 2021 DAYTON LOCAL