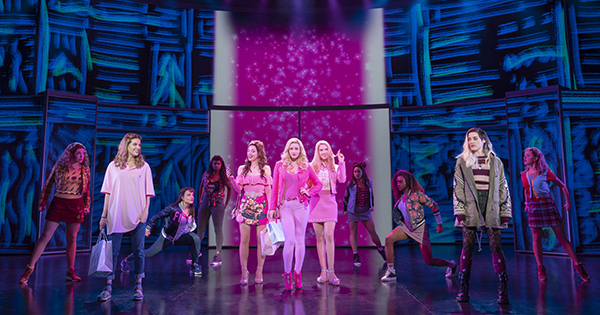 Do you celebrate October 3 more than May 4?

Do you wear pink on Wednesdays?

Do you use ‘fetch’ in a way other than with your dog?

If you answered yes to one or more of the above questions, ‘Mean Girls’ is a must see. The 2004 movie translates well into a musical, featuring many of the beloved lines and all the iconic characters. At the center of it all is an ageless story that connects with anyone who ever endured high school. As a new student from Africa, Cady Heron (English Bernhardt) is desperate to fit in. She deviously lands in with the wrong crowd and chaos ensues.

The wrong crowd is namely ‘The Plastics’ led by Queen B-word, Regina George (Nadina Hassan), who has an ego even bigger than her backside grows to be. Hassan is wickedly divine in the role. When it comes to stage presence, Hassan is an apex predator.

Every queen needs a court, and Regina’s consists of Gretchen Wieners (Jasmine Rogers), who knows everything about everyone which is why her hair is so big; and Karen Smith (Morgan Ashley Bryant), who may be dim witted but shines on stage. It’s no wonder Regina likes them around as being between two such beacons of light illuminates anyone.

The biggest standouts/show stealers are Janis Sarkisian (Lindsay Heather Pearce) and Damian Hubbard (Eric Huffman). They go together better than Kalteen Bars and chocolate milk. Their talent is more filling than an all carb diet. Any show would benefit from Pearce and Huffman being a part of it, ‘Mean Girls’ certainly does.

Credit to April Josephine, who as Ms. Norbury pushed me to check the program to make sure Tina Fey wasn’t making a special appearance. Josephine totally embodies Fey, from body language to her specs, and everything in between. Furthermore, she also totally transforms herself into the cool Mom, Mrs. George. Not many could pose as Tina Fey and Amy Poehler in the same show, but Josephine does. I kept waiting for her to anchor Weekend Update all on her own.

Dancing is an art form I often tremendously undervalue. The talented cast really stood out to me in this show though. At times it resembled a dancing showcase, with a storyline thrown in. The talented ensemble displays more precise moves than occurs during a championship chess tournament. Highlights include some high energy tap dancing to kick off the second act in ‘Stop’ and toe-tapping hip hop during ‘Whose House is This?’ Plus, lunch trays have never been put to better use than when as a prop during another group dance.

In my opinion two other scenes that raises the show to another level is when Aaron Samuels (Adante Carter) reveals to Cady that she’s become just like Regina. Also when Janice and Damian confront her about the same thing. The two moving scenes are examples of theatre at its best.

‘Mean Girls’ is also very visually appealing, beyond the beautiful and diverse cast, is how projected images are used to create backgrounds. It’s masterfully done, especially the shopping mall scene.

There’s much to enjoy about ‘Mean Girls’ and in honor of Glen Coco I will give it four stars. You go Glen Coco!

For more information about the show, see Mean Girls - now at the Schuster thru June 5