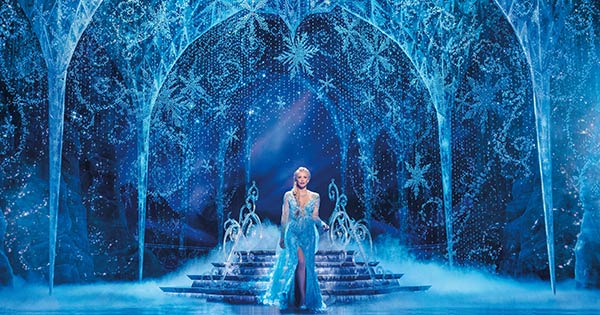 Disney blockbuster FROZEN and LES MISÉRABLES are among the lineup of Broadway musicals coming to Dayton as part of the 2022-2023 Premier Health Broadway Series.

“Dayton audiences welcomed the Premier Health Broadway Series back this past season in a way we never expected with record sales for our amazing lineup. Next season, we’re bringing a wide variety of shows including several Regional Premieres at the Schuster Center including the Disney blockbuster Frozen and the Tony winning A Soldier's Play at the Victoria Theatre. The lineup coming to Dayton next season offers something for everyone, but what all these shows have in common is the ability to bring people together in a way that only the theatre can provide. We are thrilled for our audiences to experience the best of Broadway right here in Dayton “says Dayton Live President and CEO, Ty Sutton.

Here are the Broadway shows that are coming to Dayton’s Schuster Center stage:

PRETTY WOMAN: THE MUSICAL (Tuesday, November 1, 2022-Sunday, November 6, 2022, at the Schuster Center) is based on one of Hollywood’s most beloved romantic stories of all time and springs to life with a powerhouse creative team led by two-time Tony Award®-winning director and choreographer Jerry Mitchell (Hairspray, Kinky Boots, Legally Blonde). Brought to the stage by lead producer Paula Wagner, PRETTY WOMAN: THE MUSICAL features an original score by Grammy® winner Bryan Adams and Jim Vallance (“Summer of ’69,” “Heaven”), and a book by the movie’s legendary director Garry Marshall and screenwriter J. F. Lawton. PRETTY WOMAN: THE MUSICAL will lift your spirits and light up your heart. “If you love the movie, you’ll love the musical!” (BuzzFeed News). Are you ready to fall in love all over again?

LES MISÉRABLES (Tuesday, January 24, 2023-Sunday, January 29, 2023, at the Schuster Center) the Tony Award-winning musical phenomenon by Alain Boublil and Claude-Michel Schönberg, presented by Cameron Mackintosh, is coming to Dayton! This brilliant staging has taken the world by storm and has been hailed as “Les Mis for the 21st Century” (Huffington Post), “a reborn dream of a production” (Daily Telegraph), and “one of the greatest musicals ever created” (Chicago Tribune). Set against the backdrop of 19th century France, LES MISÉRABLES tells an enthralling story of broken dreams and unrequited love, passion, sacrifice, and redemption – a timeless testament to the survival of the human spirit. This epic and uplifting story has become one of the most celebrated musicals in theatrical history. The magnificent score of LES MISÉRABLES includes the songs “I Dreamed a Dream,” “On My Own,” “Bring Him Home,” “One Day More,” “Master of the House” and many more. Seen by over 130 million people worldwide in 53 countries and 22 languages, LES MISÉRABLES is undisputedly one of the world’s most popular musicals.

ANASTASIA (Tuesday, March 21, 2023-Sunday, March 26, 2023, at the Schuster Center) Inspired by the beloved films, this romantic and adventure filled new musical is on a journey to Dayton at last! From the Tony Award®-winning creators of the Broadway classic Ragtime, this dazzling show transports us from the twilight of the Russian Empire to the euphoria of Paris in the 1920s, as a brave young woman sets out to discover the mystery of her past. Pursued by a ruthless Soviet officer determined to silence her, Anya enlists the aid of a dashing conman and a lovable ex-aristocrat. Together, they embark on an epic adventure to help her find home, love, and family. ANASTASIA features a book by celebrated playwright Terrence McNally, a lush new score by Stephen Flaherty (music), and Lynn Ahrens (lyrics) based on original direction by Tony Award® winner Darko Tresnjak with choreography by Peggy Hickey and tour direction by Sarah Hartmann.

Disney’s FROZEN (Thursday, May 4, 2023-Sunday, May 14, 2023, at the Schuster Center) from the producer of The Lion King and Aladdin, this Tony®-nominated Best Musical, is now on tour across North America and the critics rave, “It’s simply magical!” (LA Daily News). Heralded by The New Yorker as “thrilling” and “genuinely moving,” FROZEN features the songs you know and love from the original Oscar®-winning film, plus an expanded score with a dozen new numbers by the film’s songwriters, Oscar winner Kristen Anderson-Lopez and EGOT winner Robert Lopez. Oscar winner Jennifer Lee (book), Tony® and Olivier Award winner Michael Grandage (director), and Tony winner Rob Ashford (choreographer) round out the creative team that has won a cumulative 16 Tony Awards®. An unforgettable theatrical experience filled with sensational special effects, stunning sets and costumes, and powerhouse performances, Disney’s FROZEN is everything you want in a musical: It’s moving. It’s spectacular. And above all, it’s pure Broadway joy.

AIN’T TOO PROUD – THE LIFE AND TIMES OF THE TEMPTATIONS (Tuesday, June 13, 2023-Sunday, June 18, 2023, at the Schuster Center) AIN’T TOO PROUD – THE LIFE AND TIMES OF THE TEMPTATIONS is the electrifying, new smash-hit Broadway musical that follows The Temptations’ extraordinary journey from the streets of Detroit to the Rock & Roll Hall of Fame. With their signature dance moves and silky-smooth harmonies, they rose to the top of the charts creating an amazing 42 Top Ten Hits with 14 reaching number one. Nominated for 12 Tony Awards® and the winner of the 2019 Tony Award® for Best Choreography, AIN’T TOO PROUD tells the thrilling story of brotherhood, family, loyalty, and betrayal, as the group’s personal and political conflicts threatened to tear them apart during a decade of civil unrest in America. Written by three-time Obie Award winner Dominique Morisseau, directed by two-time Tony Award® winner Des McAnuff (Jersey Boys), and featuring the Tony®-winning choreography of Sergio Trujillo (Jersey Boys, On Your Feet!), the unforgettable story of this legendary quintet is set to the beat of the group’s treasured hits, including “My Girl,” “Just My Imagination,” “Get Ready,” “Papa Was a Rolling Stone,” and so many more.