Holly Days returns to the Dayton Arcade this December
Login

'Holly Days' returns to the Dayton Arcade this December 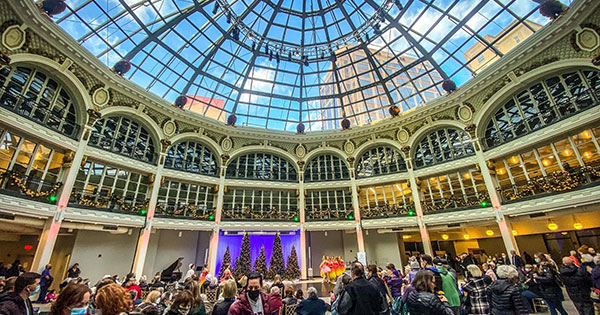 For the second year in a row, Dayton Arcade hosts its popular holiday celebration. 'Holly Days' returns to the Arcade Rotunda Dec 6-8.

Celebrate the holidays at the Dayton Arcade!

The Dayton Arcade will once again welcome attendees from all over the region to its annual flagship event, “Holly Days at the Arcade Presented by Universal 1 Credit Union & AES Ohio”.

Holly Days, the 1992 and 1993 events hosted at the Arcade by the City of Dayton, featured merchants, holiday décor, and entertainment. It was estimated that around 150,000 Daytonians visited the Arcade during these early events. In 2021, the Dayton Arcade’s resurrected Holly Days event drew huge crowds for its first annual event in almost 30 years. This year’s three-day event will bring back the nostalgia and excitement that powered the past Holly Days.

“Holly Days at the Arcade Presented by Universal 1 Credit Union & AES Ohio”, organized by Cross Street Partners and Culture Works, will incorporate the Rotunda event space as a food and artisan market, featuring holiday shopping from over 30 vendors. The Tank Inspired by CenterPoint Energy will also host additional vendors, a community Lego Build hosted by Brixilated, and a cash bar. Local food trucks will line Fourth Street in front of the Arcade’s main entrance. The Contemporary Dayton will have its CoSHOP available with a focus on multicultural artists, woman creators, and sustainable items. The Arcade’s holiday décor and surprises will be sure to delight Daytonians of all ages.

Live holiday entertainment curated by Culture Works will also be a highlight, with local performing arts groups set to perform in the Arcade’s iconic Rotunda and Tank event spaces. These performances will take place all throughout the event’s three days, with a full schedule to be announced the first week of December.

"I think the artists have just as much fun creating and performing for Holly Days as the guests do watching them," said Lisa Hanson, President and CEO for Culture Works. "Our creative community really knows how to activate these spaces inside the Arcade and captivate a crowd. We’re thrilled to help bring even more performances and local artists to Holly Days in 2022!”