Step Inside the Home of Paul Laurence Dunbar
Log In 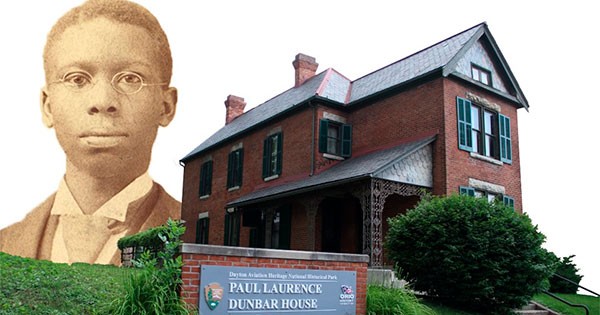 Join us as we explore the restored home of the first internationally acclaimed African-American poet, Paul Laurence Dunbar. 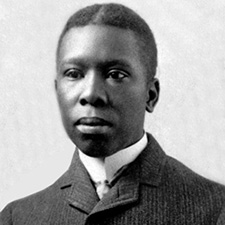 Born in Dayton, Ohio, to emancipated slaves Matilda and Joshua Dunbar on June 27, 1872, Paul Laurence Dunbar's meteoric rise to fame was inspiring and made possible by his determined and loving Mother.

As a slave, Matilda was separated from her family and sold twice before she was 16. Once free, she reunited with her Mother and Grandmother in Dayton where she met Paul's father. Joshua had been a soldier with the 5th Massachusets Colored Calvary and rose to the rank of Sargent. The Dunbar's divorced after a couple years and Joshua spent his final years at the Dayton Soldiers Home.

Paul's mother supported her family by taking in washing and ironing. She educated herself by coaxing children in the neighborhood to teach her what they learned in school in exchange for homemade cookies.

Paul started school in 1878. He was the only black student in his class at Dayton's Central High School. There he befriended Orville Wright, became the editor of the Central's newspaper and was a member of the literary and debate societies. Orville dropped out, though he and Wilbur printed Dunbar's "Dayton Tattler" newspaper for the African American community in the Wright Print shop in 1890. Paul stayed in school and graduated in 1891. 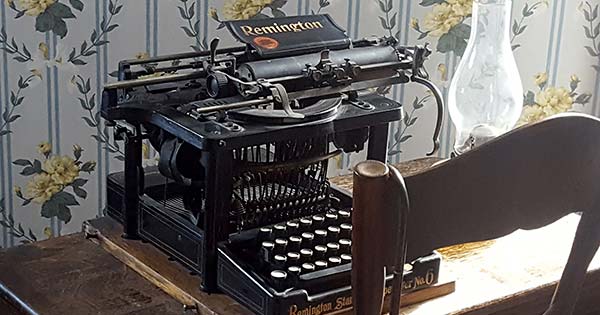 Unable to afford college, Dunbar found a job as an elevator operator in downtown Dayton. In 1892 a former teacher invited him to speak at the convention of the Western Association of Writers in Dayton. Poet James Newton Matthews wrote a widely published article commending Dunbar that earned him attention and led to publishing his first poetry collection, Oak and Ivy, in 1893.

Dunbar quit his job the same year to cover the World’s Columbian Exhibition in Chicago (a.k.a. Chicago World's Fair) for the Dayton Herald. While there he recited poems on Colored Americans Day and gained the respect of abolitionist and statesman Frederick Douglass . An 1896 review of Paul's dialect poems published in Harpers Weekly led him to tour the US and Great Britain to speak his word art.

Dunbar married poet Alice Ruth Moore in 1898, and just one year later was diagnosed with tuberculosis. Antibiotics had not been discovered yet and Paul turned to alcohol. Alice left him in 1902 to escape his alcoholism and abuse, though they did not divorce.

In 1903 Dunbar returned to Dayton. The next year he bought his mother the home on Summit Street (now Paul Laurence Dunbar Street). Paul stayed with his mother and continued to write until his death on February 9, 1906, at only 33 years of age. Dunbar was interred in the Woodland Cemetery in Dayton. After this death, Matilda lived in the house for 28 more years, until she passed in 1934. 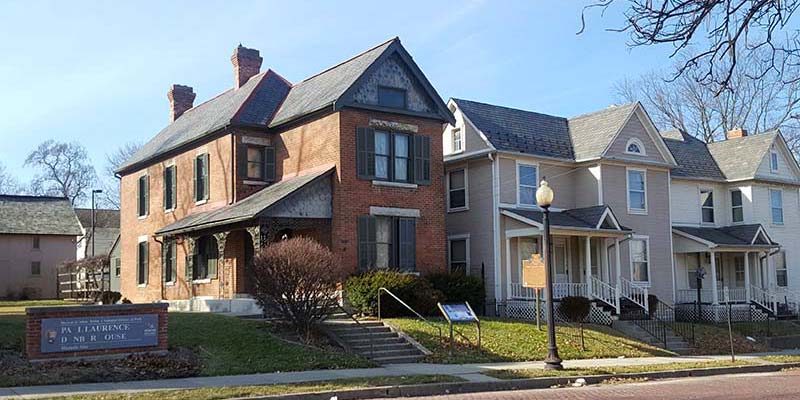 The Victorian home Dunbar bought was restored in 2003 to its appearance at the time when he and his mother, Matilda, lived there. Both large and lavishly decorated, the walls and ceilings are wallpapered in every room but the kitchen, an indicator of Dunbar’s success and wealth. 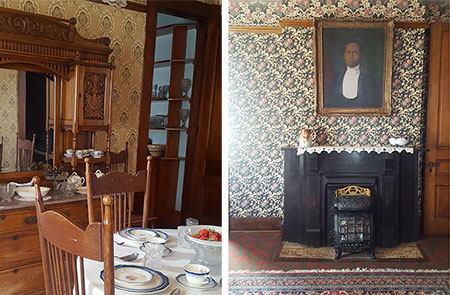 The formal parlor at the front of the house could be separated from the adjacent family parlor and accessed by its own entry door. The family bible is on display in the formal parlor.

The dining room’s cheery yellow wallpaper contains a unique sideboard with a Murphy bed in the back.

The kitchen was state of art for the time and contained city water, a cistern pump, and hot water heater. A “summer kitchen” added to the back of the house contained the icebox and laundry facilities. 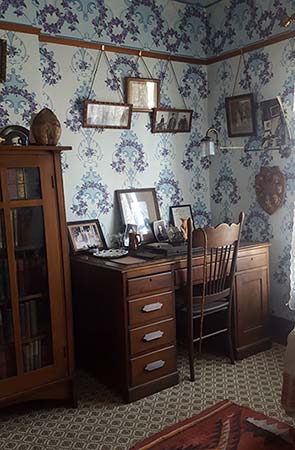 The 2nd-floor bathroom boasted a built-in water heater near the tub, in addition to a toilet and sink. Aware that his mother had hauled much hot water as a slave, Paul wanted the best for her now that he could afford it.

Matilda had a bedroom with adjacent sewing room upstairs. Word is she was quite fashionable and had a large wardrobe.

Paul had 2 rooms upstairs also, his bedroom and a study he called his “loafing holt”, a term he picked up in England. Following Paul’s passing, Matilda did not change or use Paul’s rooms, offering overnight guests the attic or the Murphy bed in the dining room.

How to visit the Paul Laurence Dunbar State Memorial

© 2021 Dayton Local. Unauthorized use and/or duplication of this material without express and written permission from Dayton Local is strictly prohibited. Excerpts and links may be used, provided that full and clear credit is given to Dayton Local with appropriate and specific direction to the original content.
Visit Website

Historic C-47 That's All, Brother at the Air Force museum April 20-22
Events Calendar Featured Events
Dayton Local takes reasonable measures to ensure the quality and accuracy of the information on this page. Use of this site is at your own risk, and by doing so, you agree to our Terms & Conditions. You can report inaccurate, misleading or inappropriate information using the button below. Thank you.
© 2021 DAYTON LOCAL