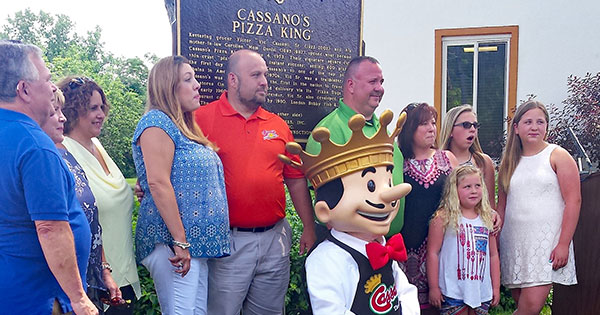 The day before their 63rd Anniversary, Cassano's Pizza King was honored by the State of Ohio and bestowed with an Ohio Historical Marker.

Cassano’s Pizza King was honored with an Ohio Historical Marker Friday June 3rd; nearly 63 years to the day after selling their first pizzas in a 20' x 15' room at the back of a small grocery store on Schantz Ave in Kettering. The marker is positioned along Stroop Road at their flag ship store.

On the advice of a family friend Victor “Vic” Cassano Sr. & his mother-in-law Caroline “Mom” Donisi opened their first location June 4, 1953. Their signature square-cut, thin-crust “pizza pie” was an instant success; selling 400 pizzas the first day. Cassano’s, also referred to by “Vic & Mom’s” in years past, was one of the first restaurants in the country to franchise and went on to become one of the top pizza chains in America by the mid 1970’s. Today, Cassano’s Pizza King is a locally owned family business with the 3rd generation of Cassano family members at helm.

The chain plans to add several new menu items in honor of their recognition as a historic Ohio business. I suspect the “Vic’s Big Cheese” will remain my personal favorite, though I’ll reserve final judgment and employ Cassano’s motto: “La prova e nel gusto” the proof is in the taste.

PS: At the reception following the unveiling of the marker, I got to see 30 inch party pizza’s for the first time. They are enormous; it took two people to carry each one out! Pictures don’t do them justice.

Solar-Powered Dayton Native, Sunny-Side Up loves people-critters-pizza-beer & laughter. Ask her how your biz or event can be featured on the #1 site for #Places2Go & #Things2Do in Dayton 937-545-5478
Find more posts
MORE NEWS
More Information