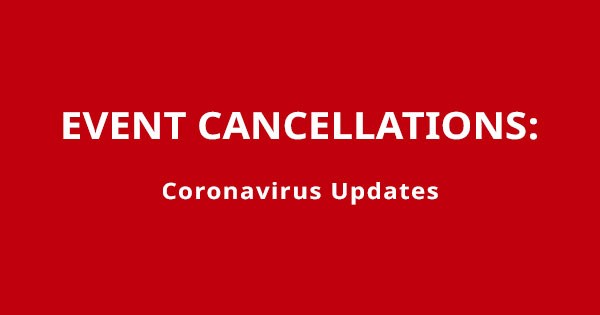 Closures and event cancellations around the Dayton area due to the COVID-19 coronavirus pandemic.

Events that have been canceled or postponed due to coronavirus pandemic

3/12 – Gov. Mike DeWine has announced schools will close for three weeks beginning Monday, March 16, in addition to a ban on most major events with more than 100 people. In addition, the Governor has now ordered all bars and restaurants to close dining rooms by Sunday at 9pm. Restaurants will be able to offer carryout service.

UPDATE 3/22 – Governor DeWine has issued an order for Ohioans to stay at home. The order begins Monday, March 23 at 11:59 p.m. through April 6. Exceptions include "essential activities", including taking care of others, and outdoor exercise, provided you maintain social distancing. Grocery stores, take-out restaurants, pharmacies will remain open.

UPDATE 4/2 – Gov. DeWine extends Ohio’s Stay-at-Home order until May 1. Governor DeWine has announced that the initial "Stay at Home" order for the state, which was due to expire next Monday, will be extended to May 1.

Closures & cancellations due to COVID-19

** THIS LIST IS NO LONGER BEING UPDATED - FOR MAJOR FESTIVAL ANNOUNCEMENTS, PLEASE SEE:

As many more events have been affected due to the coronavirus pandemic, this list may no longer contain up-to-date information. Events that we have confirmed as canceled, suspended or postponed have been clearly marked throughout our community calendar.