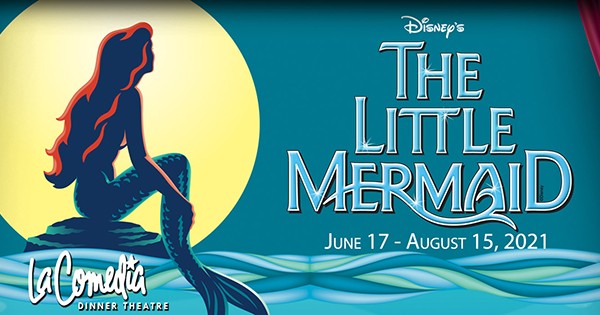 It’s back to like old times at La Comedia, don’t miss the opportunity to dive in and experience ‘The Little Mermaid.’

On a personal note, I’ve never been on a underwater deep sea diving excursion (I don’t like masks…scuba masks). However, attending ‘The Little Mermaid’ at La Comedia Dinner Theatre is a similar type of experience as up close encounters with a variety of sea life is provided, as is stunning visuals and lots of vibrant colors. Plus, masks of no kind are required.

At the heart of ‘The Little Mermaid’ is a really compelling story and some catchy songs too. It’s the tremendous cast though that brings it to life and adds an extra layer of enjoyment. Leading the way is Katie Ann Bonavita as Ariel, whose voice resembles a fairytale (almost too good to be true). Her singing of ‘Part of your World’ is proof positive of that comparison.

Ariel yearns for a life amongst humans, and to use mysterious objects like forks, especially after laying eyes on Prince Eric (Jeremy Smith). Just wait until she sees a spork. Prince Eric’s looks and vocals are good bait to reel in any suitors, whether they have fins or fit.

A high point of the show is the performance of ‘Under the Sea’ by Sebastian (Anirudh Keshamouni), its high energy with a contagious beat. A school.of colorful fish fills the stage for some dazzling choreography and there’s nothing crabby about Keshamouni’s performance. From the accent to his fun loving nature, he totally embodies the crustacean.

Speaking of Keshamouni, he also excels with his rendition of ‘Kiss the Girl.’ The song seems tailor made to his voice. If not for my wife sitting right next to me, I would have smooched Ariel myself in response.

There are some obstacles in between Ariel living happily ever after with Prince Eric, including her disapproving father, King Triton (Steven Lakes). Lakes brings a strong, domineering presence to the role and some impressive pecs. Yes, they are real and they are fabulous.

Another major thorn in their side is the dastardly Ursula. The villainess is played masterfully by Tori Kocher. Kocher has a blessed voice and displays all the mannerisms of evil. She creates a character that is fun not to like.

Special mention must be made of Ursala’s cohorts; Jetsam (Dylan Jackson) and Flotsman (Jake Jones). You’ll get a real charge out of duo, who make the most out of every opportunity given.

Another scene stealer is Digger Howard, particularly as Chef Louis. Watching someone catch crabs has never been so fun. It’s a bit part that leaves a lasting impression upon the audience. When there’s no Chris Kramer, some Digger Howard is the next best thing.

Matthew Shanahan is Positoovity delightful as Scuttle and Sam Kingrey is charming as Flounder, The part of Flounder is shared with Jax Heritage who surely is equally enjoyable.

A familiar face in La Comedia’s productions is Colin Cranston, he blends in to a number of shows. His role as Grimsby stands out as one of his best. The rest of the entire ensemble is superb.

This was our four year old daughters first time to La Comedia and she thoroughly enjoyed the show. As those sitting around us can probably attest, she sang along to most of the songs and often danced in her seat. ‘The Little Mermaid’ is a show all ages will enjoy.

It’s back to like old times at La Comedia, as I was especially delighted to see the cheese spread and crackers back on the table. Two (or three) trips back to the buffet has been reinstated and seating is open to full capacity. Don’t miss the opportunity to dive in and experience ‘The Little Mermaid.’ 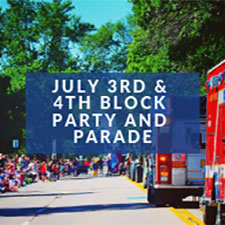 Fairborn July 4 Parade & Fireworks
Events Calendar Featured Events
Follow Us
Dayton Local takes reasonable measures to ensure the quality and accuracy of the information on this page. Use of this site is at your own risk, and by doing so, you agree to our Terms & Conditions. You can report inaccurate, misleading or inappropriate information using the button below. Thank you.
© 2022 DAYTON LOCAL