Come From Away is a must see show
Login

Come From Away is a must see show 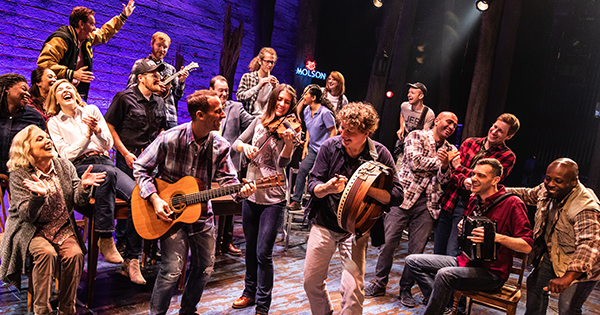 Review: 'Come From Away' is a gripping, fast-paced journey with lots of hearty laughs mixed with tear jerking moments of sincere sadness.

Come From Away is a must see show

There’s great shame in pulling up to the pump at the gas station, and exiting your car, only to discover the tank is on the other side, Trust me, I’ve experienced it, several times. Nobody ever mentioned the arrow next to the gas icon on the dashboard, points you in the right direction. Isn’t that pertinent information to know? I get gas a lot more often than I turn on my hazards, but that gets taught. I drove for over 15 years without knowing that. How could it be?

Similarly, it’s a miscarriage of justice that I had never heard about the greatness of ‘Come From Away.’ Everybody knew Jada Pinkett Smith has alopecia, but not that ‘Come From Away’ is a must see show. Don’t slap me, but that’s not right. This musical needs to be talked about more. Consider me like an arrow pointing you to go see it.

Prior to attending, my excitement level for the show was pretty low. I expected a ho-hum depressing tale about travelers that get stranded in Newfoundland on 9/11. I left bursting with pride over having a new musical in my all-time top three. It’s a gripping, fast-paced journey with lots of hearty laughs mixed with tear jerking moments of sincere sadness. From beginning to end, ‘Come From Away’  is a display of pure excellency.

The stellar cast defines the word ensemble. There’s no top billing, but all work together on equal ground to tell the story.  They are all on stage from start to finish, each playing multiple characters, who are distinctly different from each other. With just slight costume changes, such as adding a hat, and altering their voice, they totally transform themselves. It could easily be confusing to have over 10 actors, each play multiple parts, within seconds of each other, but all the changes are clearly distinguishable. Remember, this is coming from someone who drove for over a decade without knowing what side the gas cap is on. The magic created by the cast is just one appealing aspect of the show.

The ensemble includes the Newfoundland locals, such as Julie Johnson as Beulah, a sheltering organizer who tells groan inducing jokes. Janice Knitel as a rookie news reporter thrust into action. The mayor, Claude (Kevin Carolan) who holds office hours at Tim Hortons and has an endearing Canadian accent. There’s also Bonnie (Sharone Sayegh), an animal enthusiast who works to saves puppies to chimps. And Oz (Harter Clingman), who not only serves law & order, but provides everything except feminine hygiene products to the stranded passengers in need.

Some of the featured passengers include a gay couple, both named Kevin (Jeremy Woodard & Aaron Michael Ray) who find unexpected acceptance. Ray also plays a Ali, a Muslim forced to endure unfair treatment. Ray is a perfect example of the stark contrast between two characters played by the same actor and the ease in which the transition is made.  Amidst all the chaos, there’s a budding romance between Texan Diane (Christine Toy Johnson) and Englander (Chamblee Ferguson). A mother desperately trying to get hold of her firefighter son at Ground Zero is movingly played by Danielle K. Thomas. There’s others who appear, covering a wide range of nationalities and faiths, plus a woman who breaks out singing, ‘My Heart Will Go On.’

In addition to grills, James Earl Jones II (Bob) also steals a number of scenes. The only thing that could possibly make  ‘Come From Away’  any better, was if him saying, ‘Luke, I am your father,’ or at least, ‘This is CNN,’ was worked in. A commanding performance is given by Marika Aubrey as Beverly, the third female commercial airline pilot hired by American Airlines.

The staging is simple, as using just mostly chairs the stage is transformed from an airplane, to a bus, to a bar and other locations, both swiftly and accurately. It really places you inside the plane, stuck on the runway for over 24 hours and the madness it causes. Also, into the bus where the frightened passengers are in an unknown land going to an undisclosed location, surrounded by strangers.

The pacing and fluid writing style is on par with any other modern musical. There’s no time for any mind wandering as each line flows seamlessly into the next. With no intermission, it’s approximately 100 minutes of captivating, true story material.

A couple of standout musical numbers are ‘Screech In,’ a foot stomping good time, featuring a seductive cod. The scene is guaranteed to lift your spirts and is a major reason why I consider ‘Come From Away’ as one of my favorites. During ‘Me and the Sky’ Marika Aubrey controls the stage much like her character does a cockpit. In addition, be warned, as you may see a surprise flashing during the show.

The orchestra or more fittingly, the band, is on stage throughout and provides the perfect backdrop of sound. Allow yourself a few extra minutes at the end to dance in the aisles while they rock out. Rather than rush to your car, you will want to stay and just keep listening.

9/11 stirs lots of emotions, and is a time that the entire audience can relate with. Though tragic, ‘Come From Away’ highlights the good that came from it, as people united to serve one another. At a time of so much division, it’s a good reminder of the compassion that flowed just over twenty years ago. ‘Come From Away’ is a show that won’t be forgotten and will leave you craving fish with cheese.