Space Shuttle Exhibit at the National Museum of the U.S. Air Force
Login

Space Shuttle Exhibit at the National Museum of the U.S. Air Force 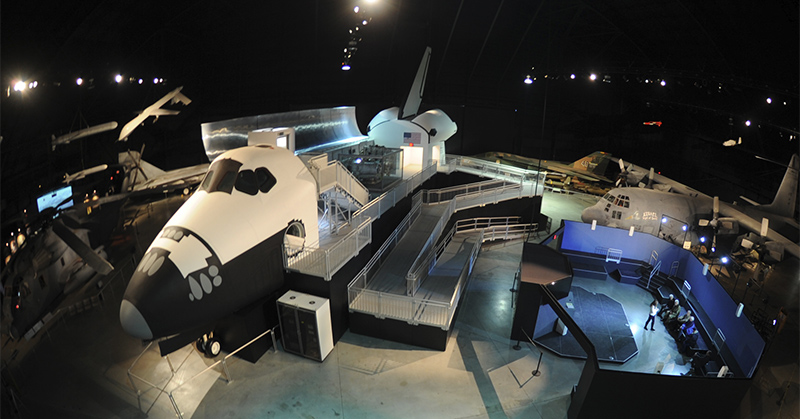 The new Space Shuttle Exhibit, which features NASA's first Crew Compartment Trainer is to open Feb. 26 at the National Museum of the U.S. Air Force.

Space Shuttle Exhibit at the National Museum of the U.S. Air Force

New Space Shuttle Exhibit to open Feb. 26 at the National Museum of the U.S. Air Force in Dayton  Ohio

by National Museum of the U.S. Air Force

National Museum of the U.S. Air Force visitors will be cleared for liftoff when the museum's new Space Shuttle Exhibit opens to the public on Feb. 26.

The exhibit, which features NASA's first Crew Compartment Trainer, allows visitors to experience the size and shape of an actual space shuttle orbiter by entering the payload bay and looking into the flight deck and mid-deck levels.

Following the arrival of the Crew Compartment trainer in summer 2012, work began on the design and construction of a full-scale representation of a NASA shuttle payload bay, engine, and tail sections, along with a 60-seat dedicated educational area or Science, Technology, Engineering and Math (STEM) Learning Node, by Display Dynamics, Inc. of Clayton, Ohio.

These portions of the exhibit, along with visitor observation and access structures, have been completed and the Teal Ruby satellite has been placed inside the payload bay. In addition, space-related videos will be available for viewing in the STEM Learning Node (when it is not in use for other scheduled programs).

Future plans call for the museum to continue populating the exhibit with additional artifacts such as space suits and provide interpretive information about topics such as astronauts, space science, living in space, and the Air Force's role in space. Eventually, the exhibit will be moved to a new Space Gallery in the museum's fourth building as part of a multi-phase, long-term expansion plan to house the museum's growing space collection, as well as the Presidential Aircraft Gallery, Research & Development Gallery and Global Reach Gallery.

According to Museum Director Lt. Gen. (Ret.) Jack Hudson, the exhibit is truly unique and will serve as an important educational tool.

"We are very pleased to open this one-of-a-kind Space Shuttle Exhibit and STEM Learning Node, and we thank Display Dynamics, Inc. for their hard work in helping us make these structures a reality," Hudson said. "This exhibit will inspire us all to learn more about space and the role of our Air Force in space, and we hope that when you visit - whether that be in-person or online - it will inspire you, too, and become one of the vehicles that launches a new generation of Americans who are well-educated about space and STEM."

Other components of the Space Shuttle Exhibit include two interactive space shuttle landing simulators, which were added last summer and allow visitors to test their skill at landing a space shuttle orbiter. Designed by Historic Space Systems of Danville, Ohio, the simulators are representative of a space shuttle commander's and pilot's stations, and feature a reproduction of the forward portion of the space shuttle flight deck with internal cockpit dimensions that replicate its actual size.

The National Museum of the United States Air Force, located at Wright-Patterson Air Force Base near Dayton, Ohio, is the service's national institution for preserving and presenting the Air Force story from the beginning of military flight to today's war on terrorism. It is free to the public and features more than 360 aerospace vehicles and missiles and thousands of artifacts amid more than 17 acres of indoor exhibit space. Each year more than one million visitors from around the world come to the museum. For more information, visit our website.