Trumans Air Force One on display in Dayton
Login

Truman's Air Force One on display in Dayton 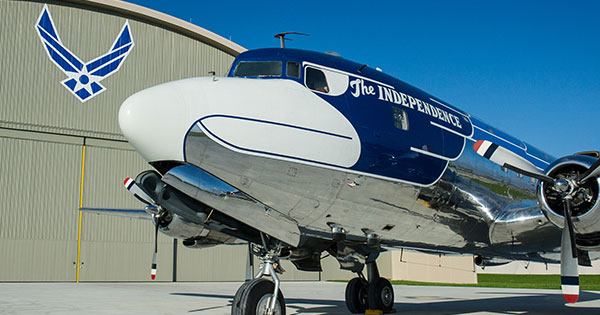 President Harry Truman’s Air Force One - Douglas VC-118 “The Independence” at the National Museum of the U.S. Air Force, in Dayton OH.

Truman's Air Force One on display in Dayton

A military version of the Douglas DC-6 commercial airliner, this Douglas VC-118 was used by President Harry S. Truman from 1947 to 1953.  President Truman named his plane The Independence, in recognition of his hometown, Independence, Missouri.

The Independence was the second aircraft built specifically to transport the President of the United States, and was formally commissioned on July 4, 1947.  President Truman made his first official flight in the aircraft on Aug. 31 to an international conference at Rio de Janeiro, Brazil. One of the plane's most historic flight was on October 15, 1950 when it carried President Truman to Wake Island to discuss the Korean War situation with Gen. Douglas MacArthur.

The U.S. Air Force retired The Independence from presidential service in May 1953, and it became a VIP transport for several Air Force organizations. The aircraft was eventually retired from service and placed on display at the National Museum of the US Air Force in Dayton in 1965.

The museum restored The Independence in 1977-1978, returning the aircraft to its former presidential markings and eagle motif paint scheme.

For more information about this historic aircraft, click here.