The 'Flyover' celebrating the first flight was dedicated on Independence Day 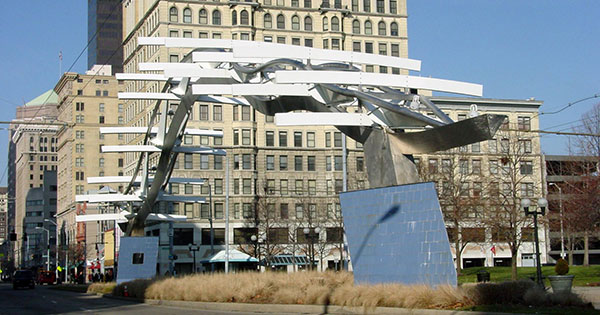 The 'Flyover' depicting the first powered flight by Orville Wright, was commissioned to celebrate Dayton's 200th anniversary and was dedicated on Independence Day, 1996.

The 'Flyover' celebrating the first flight was dedicated on Independence Day

The story behind The 'Flyover' in downtown Dayton

You've driven by this abstract sculpture in downtown Dayton a thousand times, but do you know the history behind it? 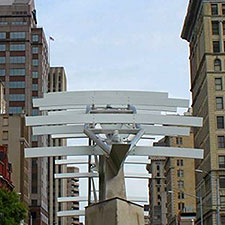 As a way to celebrate Dayton's 200th anniversary, artist David Black was commissioned to create a sculpture with an aviation theme that would serve as the gateway to the south end of Main Street downtown. After some feedback from the public, Black came up with a 150-foot long piece, which he called the Flyover.

The Flyover depicts the first powered flight made by Orville Wright at Kitty Hawk, North Carolina, on December 17, 1903. The steel tubing of the monument is 120 feet long (the length of the first flight) and the gentle curve traces Orville’s known flight path through the sky that day.

The $415,000 memorial to flight stands on a grassy island in the middle of Main Street, between Fourth and Fifth streets.  The grasses are reminiscent of the Huffman Prairie, where many test flights were conducted.

The dedication of the Flyover took place on July 4, 1996. David Black was joined by Tom Crouch, who was Chairman of the Department of Aeronautics of the National Air and Space Museum at the Smithsonian Institution.

Following the dedication, a parade was held, led by grand marshal Gary Sandy, formerly of Kettering, and best known for his role in the television series WKRP in Cincinnati. The headline act on the main stage was the Village People, followed by a concert by the Dayton Philharmonic Concert Band. The festivities concluded with a fireworks display on the riverfront. 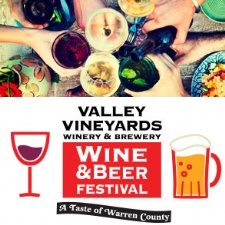 Valley Vineyards Wine & Beer Festival
Events Calendar Featured Events
Follow Us
Dayton Local takes reasonable measures to ensure the quality and accuracy of the information on this page. Use of this site is at your own risk, and by doing so, you agree to our Terms & Conditions. You can report inaccurate, misleading or inappropriate information using the button below. Thank you.
© 2022 DAYTON LOCAL