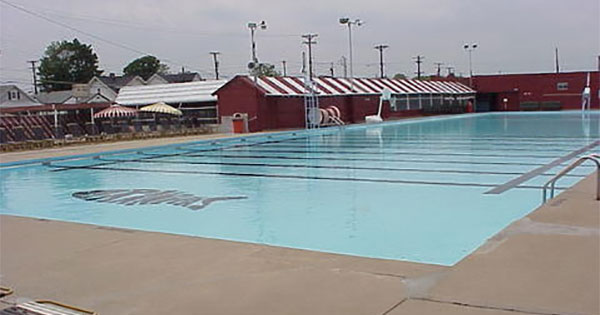 Growing up in the eighties a popular way to cool off on hot summer days, other than a slip-N-Slide, was visit an area community pool.

Growing up in the eighties a popular way to cool off on hot summer days, other than a slip-N-Slide, was visit an area community pool. It was all the fun of being in a hotel pool, but closer to home. Dayton had several such ‘watering holes,’ including the Phillips Aquatic Club, which is remembered not only for the pool but also its relation to a Hall of Fame major league baseball player.

Long before my time the Phillip’s Boat and Bath House was originally opened in 1865 by Charles Philipps on the Great Miami River near the Helena Street Bridge. Then in 1899 the breakage of a nearby dam destroyed the area. The Philipps family rebuilt in 1901 at the Leo Street location, but the property was again wiped away in 1913 by a flood. Charles Philipps with his son, Edward, and grandson, John, started over again. Before long Lois Philipps Schmidt, daughter of John, with her husband Jack Schmidt, began running the business. Lois and Jack were the parents of Mike Schmidt who played 18 seasons for the Philadelphia Phillies and is a member of the Hall of Fame in Cooperstown. Mike’s sister, Sally, along with her husband Ron Mahrt, took over for Lois and Jack, until the Philipps Aquatic Club was sold and closed in 2009.

My earliest memories of Philipps aren’t so fond, but rather horrifying, as I had to pass the swimming class called Lollipops. I don’t believe I had been out of diapers for long when I started Lollipops. At the end of each class the goal was to put your head under water in order to pick up a lollipop from the bottom of the shallow end. To this day I still don’t like being under water and have a fear of lollipops. It may have taken awhile, but I did eventually pas Lollipops before entering junior high. I never advanced to the three levels of classes that followed, which earned individuals who completed them all a spot on the Philipps swim team.

Into my teens, my desire to visit Philipps grew as I became more interested in the surrounding scenery (girls in bikinis). I made a real impression on them, by walking around with floaties on my arms. With them all pointing at me, I couldn’t help but strut. The skills I lacked in swimming was made up for in eating at Jack’s, which was more than a concession stand, but like a poolside restaurant. Jack’s had delicious barbeque sandwiches, French fries, ice cream and really refreshing milkshakes. I didn’t wait 30 minutes after eating to get back in the water either, I usually even still had some crumbs and ketchup still on me.

A person’s swimming ability really made no difference, as the pool was typically so crowded that any room to move around was extremely limited. I couldn’t have swam a lap if I wanted too, nor could I go under water to play Marco…..Polo, yet I still had lots of fun, splashing around. It was so much fun, I didn’t always get out when I had to go to the bathroom, but instead decided to just add a little to the water supply. Make up for some that had been splashed out.

All good things must come to an end, and at Philipps it started with the announcement of ‘Adult Swim.’ For some reason, the adults didn’t want to share the pool with us wild kids, but wanted it all to themselves. Adult Swim was probably no longer than thirty minutes, but it seemed like hours. To help pass the time, there was a game room and a playground. The playground contained metal animals to climb on, which were about 100 degrees from baking under the hot sun. I think I still have some burn marks from sitting on them. Yes, Philipps left me with some everlasting memories.

Others from Dayton may have gone to the pool at the NCR Park (Old River), which was only open to employees of NCR and their guests.

© 2022 Dayton Local. Unauthorized use and/or duplication of this material without express and written permission from Dayton Local is strictly prohibited. Excerpts and links may be used, provided that full and clear credit is given to Dayton Local with appropriate and specific direction to the original content.
Facebook