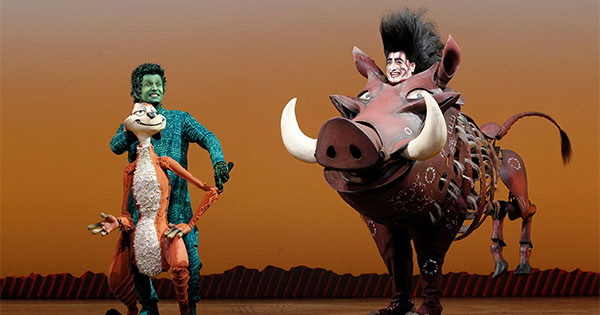 There’s a tremendous sense of awe and wonder whenever The Lion King fills the stage, but something especially amazing will occur while the hit musical is in Dayton.

In the circle of life, Ben Lipitz has engrained himself into the perfect spot. A position that brings himself and audiences all across North America great joy every single night. There’s a tremendous sense of awe and wonder whenever The Lion King fills the stage, but something especially amazing will occur while the hit musical is in Dayton, June 7 through July 3 at the Schuster Center. For the 5,000th time, Lipitz will play the role of Pumbaa, the loveable warthog with a bit of a gas problem.

The achievement is highly impressive as it’s rare for an actor to play any role for so long. The milestone is very humbling to Lipitz, who looks forward to donning the costume every night and feels a strong connection with the character. “I enjoy everything there is about Pumbaa. How grounded he is into believing Hakuna Matata. How he sees the best in people and in every situation. He has a really big heart, which I try to carry into my life,” said Lipitz.

To bring such an iconic Disney character to life, a task that Liptiz is honored to have, he combines puppetry, singing, and acting. He’s grown so accustomed to being Pumbaa that he feels like himself while on stage. “Pumbaa is such a part of me that if I do something wrong, it’s not a mistake, it’s just how Pumbaa would do it,” Lipitz laughed.

The winner of six Tony awards, including Best Musical, the landmark musical event brings together one of the most imaginative creative teams on Broadway. Tony award winning director Julie Taymor forms a story filled with hope and adventure set against an amazing backdrop of stunning visuals. Creatures from giraffes to a rhino cross the stage, appearing real as the audience is transported directly into the jungle. The Lion King also features highly popular songs, composed by Elton John and Tim Rice.

Whether seeing it for the first, second or fifth time. Lipitz believes the audience will see something new in it as the story touches on different times of a person’s life. Wherever they are on their life’s circle, a part of the show will speak to them. In addition to the compelling story, The Lion King is also a visual spectacular, with always something to marvel at. ‘It’s a spectacle and there’s a majesty to the performance,” he said. “The perception that it’s just a children’s show is mistaken. It appeals to everyone. The kids enjoy the visuals and adults the engineering of it all and it’s representation of life.”

One of the joys Lipitz receives from being part of ‘The Lion King is being paired up with Nick Cordileone as Timon. They have worked together for 6 years. “We have a great chemistry on stage and our partnership has given me an understanding of the vaudevillian brand of comedy teams,” said Lipitz.

When Lipitz saw the film version of The Lion King in 1994, he was suddenly enthralled by it and when it came to Broadway he dreamed of one day being involved. After almost 5,000 performances as Pumbaa in the musical, the dream continues as Lipitz travels on the circle of life.

Don’t miss The Lion King, at the Schuster Center, Jun 7 through July 3.