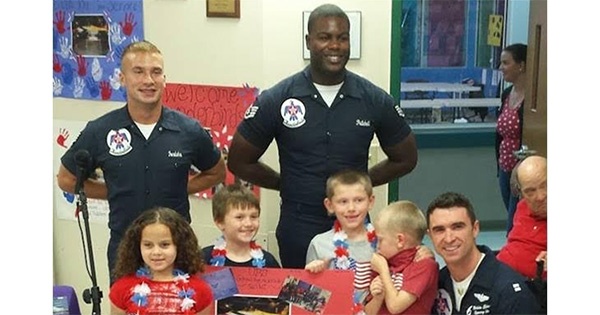 United Rehabilitation Services of Greater Dayton received a very special visit from members of the U.S.A.F. Thunderbirds team this morning. 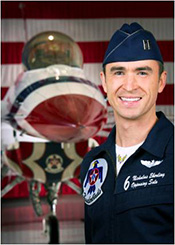 The clients and staff at United Rehabilitation Services of Greater Dayton received a very special visit this morning from members of the U.S.A.F. Thunderbirds team, who are in town for the Dayton Air Show this weekend.  Among the guests was Captain Nicholas Eberling, the opposing solo pilot flying the No. 6 jet for the U.S. Air Force Air Demonstration Squadron. Captain Eberling was accompanied by Staff Sgt. Cody Fondahn and Staff Sgt. Dwayne Pritchett who handle communications, music, and other duties for the team. It takes a team of 120 members to keep the Thunderbirds in the air and at the top of their game. 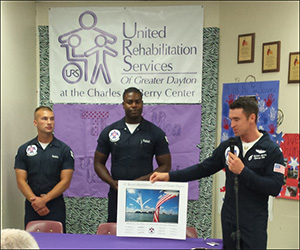 One of the highlights of the visit was when a client asked how Captain Eberling keeps from getting air sick. Both of his parents are Air Force veterans and we were all surprised to learn that as a boy he got air sick every time he flew with his Air Force pilot father until he was 15. Fortunately he stopped getting air sick and went on to become an Air Force pilot. Now he flies in tight formations sometimes within 18 inches of his teammates and performs aerial acrobatics and stunts that require special equipment to combat G-force and keep blood pumping to his heart and brain.

Solar-Powered Dayton Native, Sunny-Side Up loves people-critters-pizza-beer & laughter. Ask her how your biz or event can be featured on the #1 site for #Places2Go & #Things2Do in Dayton 937-545-5478
Find more posts
MORE NEWS
More Information 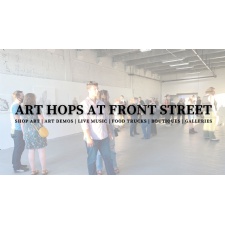 Art Hops at Front Street
Events Calendar Featured Events
Follow Us
Dayton Local takes reasonable measures to ensure the quality and accuracy of the information on this page. Use of this site is at your own risk, and by doing so, you agree to our Terms & Conditions. You can report inaccurate, misleading or inappropriate information using the button below. Thank you.
© 2022 DAYTON LOCAL