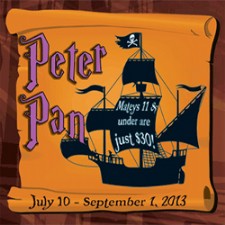 Flying onto the La Comedia Dinner Theatre stage through September 1, 2013, is 'Peter Pan.' The eternally young boy may not be faster than a speeding bullet, but 'Peter Pan' can hold an entire audience captive in the palm of his hand for the shows duration.

July 10 - September 1, 2013. - It's a bird…It's a plane…It's a boy…It's a girl…It's Peter Pan! Flying onto the La Comedia Dinner Theatre stage for a production in which the strengths are as impressive as any superhero, is 'Peter Pan.' The eternally young boy may not be faster than a speeding bullet or stronger than a locomotive, but 'Peter Pan' can hold an entire audience captive in the palm of his hand for the shows duration.

'Peter Pan' is such a grand scale production that the La Comedia stage itself can't contain all of the action as some of the characters take to the air on occasion. Peter Pan flying directly over your head, while sprinkling some magic fairy dust is just one of the dazzling effects used. The sights and the sounds of the performance combine to create an experience that will never never be forgotten, even if you do grow up.

The title role of Peter Pan is played by Corrine Proctor, yes a female, but she fits into the boy's shorts (or tights) perfectly. Her voice, body type and mannerisms erased the gender line to reflect a young boy. As if Proctor didn't have a big enough challenge in portraying a boy, for one scene she had to be a girl, playing a boy, pretending to be a girl. To her credit, Proctor also made a very believable female impersonator. In my opinion, she's a better cross dresser than RuPaul, plus a much more talented singer.

The best villains are those you love to hate, and Michael Karraker ranks among the top of that list for his portrayal of Captain Hook. As frightening as he is hilarious, Karraker is the Captain of the entire show and never allows it to sink below the level of excellence. He has a demanding stage presence that hooks your attention whether he's doing the tango or forcing innocent children to walk the plank. It's the third consecutive show at La Comedia that Karraker excels in and I'm saddened that there probably aren't any roles for him in the two remaining shows this year (The Church Basement Ladies & Christmas Spectacular).

We first meet Peter Pan when he sneaks into the Darling's residence and takes Wendy, John and Michael to Never Never Land. A magical place where childhood lasts forever. The Darling children, led by Wendy (Joy Smith) join the 'Lost Boys' clan, who share the land with a tribe of Indians and Pirates. The role of Wendy is played masterfully by Smith, whose talents exceed her years. Her voice soars as high as her body, while flying.

In his La Comedia debut, Aaron Choi proves himself to be a scene stealer as Smee, the right or left hand man (he's directionally challenged) of Captain Hook. He provides much of the comic relief to become a fan favorite.

A dog, even larger than Clifford, appears as does a host of other wild animals. The only thing missing from Never Never Land was Bubbles the Chimp or at least a rendition of 'Beat It.'

Everything else was perfect as a classic tale is brought to life in 'Peter Pan,' which continues at La Comedia through September. The clock is ticking, don't miss it or a crocodile might get you.

July 10 - September 1, 2013. Fantastic Adventures await your family as we fly to Neverland in the magical classic, Peter Pan!

The young boy who refuses to grow up whisks away Wendy, John and Michael to the mysterious land where childhood lasts forever. It is also home to the villainous pirate Captain Hook, who will stop at nothing to defeat Peter and his crew of Lost Boys.

With a production featuring beautiful sets and dazzling flying effects, Peter pan is one of the largest shows ever staged at La Comedia and will be a memory your family will never forget!
© 2022 Dayton Local. Unauthorized use and/or duplication of this material without express and written permission from Dayton Local is strictly prohibited. Excerpts and links may be used, provided that full and clear credit is given to Dayton Local with appropriate and specific direction to the original content.