Dayton Ohio - Rodgers & Hammerstein’s The King And I 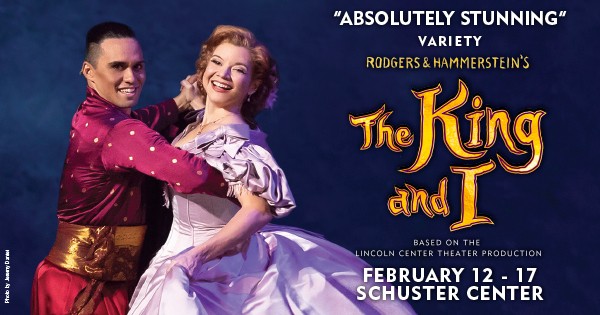 Rodgers & Hammerstein’s The King And I

Broadway in Dayton: The King And I

“Magnificent. A sweepingly romantic production. How good to be getting to know the show all over again.”

Two worlds collide in this “breathtaking and exquisite” (The New York Times) musical, based on the 2015 Tony Award-winning Lincoln Center Theater production. One of Rodgers & Hammerstein’s finest works, THE KING AND I boasts a score that features such beloved classics as “Getting to Know You,” “I Whistle a Happy Tune,” “Hello Young Lovers,” “Shall We Dance” and “Something Wonderful.” Set in 1860s Bangkok, the musical tells the story of the unconventional and tempestuous relationship that develops between the King of Siam and Anna Leonowens, a British schoolteacher whom the modernist King, in an imperialistic world, brings to Siam to teach his many wives and children. THE KING AND I is “too beautiful to miss” (New York Magazine).

Decoy Art Center ART@HOME to-go KITS
Events Calendar Featured Events
Dayton Local takes reasonable measures to ensure the quality and accuracy of the information on this page. Use of this site is at your own risk, and by doing so, you agree to our Terms & Conditions. You can report inaccurate, misleading or inappropriate information using the button below. Thank you.
© 2020 DAYTON LOCAL