Elf The Musical at La Comedia 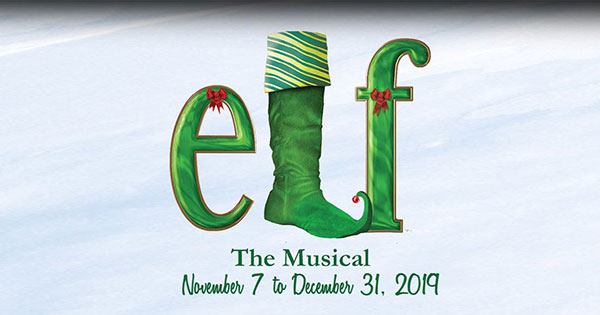 Elf The Musical at La Comedia

A title known the world over, Elf The Musical is a hilarious fish-out-of-water comedy based on the beloved holiday film starring Will Ferrell.

Buddy, a young orphan, mistakenly crawls into Santa’s bag of gifts and is transported to the North Pole. The would-be elf is raised, unaware that he is actually a human, until his enormous size and poor toy-making abilities cause him to face the truth. With Santa’s permission, Buddy embarks on a journey to New York City to discover his true identity.

Faced with the harsh realities that his father is on the naughty list and his half-brother doesn’t even believe in Santa, Buddy is determined to win over his new family and help New York remember the true meaning of Christmas.

Review of "Elf The Musical"

It was something I had never experienced in all my years of coming to La Comedia (No, I still haven't left hungry). For the first time, the parking lot was filled to the absolute max, without a single open spot. Cars were parked in the yard. That's a sure sign that either an Elvis impersonator is performing or a most excellent production is playing. I didn't see any blue suede shoes, just some boots that are curled at the toe. Elf The Musical, which does feature the King of La Comedia, Chris Kramer, is bringing in near record setting crowds. Those who already have reservations be thankful, because openings are quickly becoming as rare as wins for the Bengals. 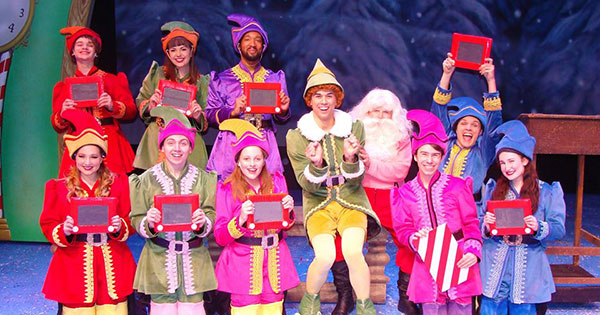 A wise man, or at least a really tall elf once said, ‘The best way to spread Christmas cheer is singing loud for all to hear.’ Some sweet potato soufflé on the side never hurts either. Elf The Musical delivers a heaping dose of Christmas cheer through music, laughs, and heart, all at an adequate volume.

The title character, named Buddy, leaves the North Pole for New York City in search of his long lost father. His hopes of life with a happy family get shredded, but all can be restored with a little bit of Christmas magic. The highlights and most of the top quotes from the 2003 movie are in the musical, along with some added songs.

Buddy is played by David Thomas who supplies the perfect amount of sugary charm to the role. You can’t help but love Buddy for his big heart and overall goofiness. Thomas excels at not just making Buddy a caricature, but a person to become emotionally invested in. Plus, he burps really well, which is crucial to the part.

No matter the role he plays Chris Kramer always nails it. However, I believe he's best at the tightly wound, obsessed with work, no nonsense business man type like Walter Hobbs (Buddy’s father). When I saw Elf on the schedule I envisioned Kramer as Mr. Hobbs and he didn't disappoint. If only my foresight was as good with the lottery numbers.

A very impressive performance was also given by Grayson Reynolds as Michael Hobbs, Buddy's younger step-brother. The strength and tone of his voice is talent in its purest form. His voice is kind of like the North Star in that it shines the brightest. On the way home my wife was praising Reynolds and said I need to write a whole paragraph about him. I always do as I'm told. Plus, she might read this.

Special mention goes to Jessie del Rio as Jovie, who is Buddy’s love interest. Also, to Desmond (I see as Sebastian next year) Thomas, who doesn’t measure up weight wise to the Macy’s manager in the movie, but surpasses him in performance. Carrie SaLoutos also makes the most of her time on stage as Deb, the frazzled secretary to Mr. Hobbs.

The sets were all designed very well. My only negative is that snow falls during the concluding 'We Wish You a Merry Christmas,' but not during the pinnacle point of the show when it dramatically starts to snow.

Elf is only part of the show as it's paired with the traditional singing of O Holy Night. It's my favorite La Comedia tradition, above even the papaya chutney dressing. I like to celebrate Thanksgiving before thinking of Christmas, but I make an exception for this. I dare anyone, even triple dog dare you (Ooops wrong show) to search through the archives for my reviews of the Christmas shows for the last few years at La Comedia and I always speak of how much I adore the singing of O Holy Night. For me as long as the buffet is included, that alone is show enough for me, well and plus dessert. You may have already guessed, but it’s sung by Chris Kramer, who again does a wonderful job. Yes, the parking lot will be crowded getting out, but don’t leave early and miss out.

If you aren’t filled with Christmas cheer after Elf The Musical (and O Holy Night) you might be a cotton-headed ninny-muggins. Elf The Musical continues at La Comedia through December 31.