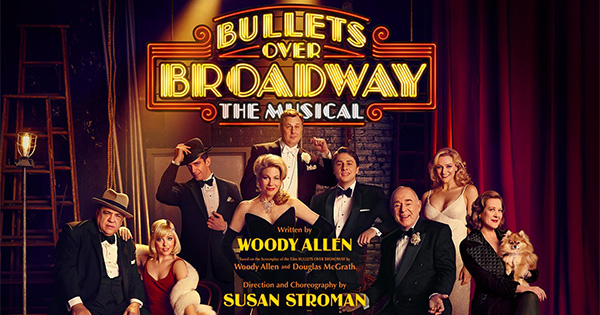 Michael Woody
Past Event - Sunday, November 8, 2015
This page may be updated if the event is repeated
Dayton Live
The Schuster Center
1 W 2nd St, Dayton, OH 45402 [map it]
Tickets on sale this summer.

To be honest, I went into Bullets Over Broadway with some strikes against it; I’m not a big fan of Woody Allen’s work or of most things involving mobsters (Never watched ‘The Sopranos), plus the recent time change has been exhausting. However, despite all of that negativity, I thoroughly enjoyed the show and managed to stay awake for it all.

From giant dancing hot-dogs to deadly shootings, Bullets Over Broadway is a fast paced musical that holds your attention from beginning to end. Though in my opinion, some of the jokes were a little off the mark, but the vocals and dancing were nothing less than spectacular. I’m not sure if the comedic stylings of Bill Cosby, err I mean Jerry Seinfeld could even match up with the array of musical talent on stage.  One of the shows highlights is the tap dance done by the gangsters, in which their feet creates a true masterpiece. Unless there’s scantily clad women involved, elaborate dance routines tend to bore me, but these men in suits were more captivating than the staff at Hooters. The scene received the biggest applause of the night and deservedly so. …By the way, speaking of scantily clad women, there were also some of those who danced extremely well.

In between all the magnificent dancing and singing, was a fun filled plot. A young, struggling playwright David Shayne (Michael Williams) is close to having a play on Broadway for the first time, but needs financial backing. The support is given by Nick Valenti (Michael Corvino), a head mobster, on the one condition that his girlfriend, Olive Neal (Jemma Jane) plays a leading role in the show. Sounds simple enough, except Olive is a ditzy blonde with very limited previous acting experience. As Olive, Jane certainly catches the eye and is annoyingly disturbing (in a good way) but with such a strong whiny Jersey girl accent much of her dialogue was hard to comprehend. Some of it may have been an audio issue, but it was a distraction.

Total chaos occurs once the production of the play begins, featuring a cast of characters that makes Olive only one in a big list of headaches for David. As David, Williams excels as the nervous type struggling to keep his sanity and moral fiber through all the craziness. The leading lady he chooses is Helen Sinclair, a conniving diva with a taste for really unusual mixed drinks, played splendidly by Emma Stratton. Stratton brings the perfect mix of refined elegance and sleaziness to the role. The play also features Warner Purcell (Bradley Allan Zarr), who not only chews up his scenes, but is always eating too. A running gag is how Warner’s weight continues to rise during the production, which led to my only laugh out loud moment. There’s also Eden Brent (Rachel Bahler), who is very attached to her little dog.

A special mention goes to Cheech (there is no Chong), played by  Jeff Brooks. Since Cheech lives a life of crime as part of the mob, it’s not surprise that he steals the show. He’s given the assignment to watch over Olive and becomes personally invested in the play. Without giving anything, I’ll just say that Cheech will stop at nothing to make sure the play (David’s play) is the absolute best it can be. The above mentioned tap dance number is during ‘Tain’t Nobody’s Bizniss If I Do,’ which is Cheech’s shining moment.

Despite a rather small part, the biggest voice goes to Hannah Rose DeFlumeri, who plays Ellen (David’s girlfriend). She makes the most out of every opportunity she is given to reach the stars with her impressive vocal talents. The talented ensemble also includes Rick Grossman as Julian Marx, the scheming producer. Grossman has a commanding stage presence, in part because he kept reminding me of a specific character actor who shows up on television and movies, and makes you say, ‘who is that guy?’ After some research, I discovered he reminds me of Wallace Shawn. The name might not be familiar, but find a picture and you’ll recognize him.

There are surprising twists in Bullets Over Broadway and the plays opening night in New York features more action behind stage than on. It’s an entertaining thrill ride that will make you glad you came. It even has me thinking about watching ‘Annie Hall’ now, maybe Woody Allen isn’t so bad…besides his name is Woody.

Bullets Over Broadway continues at the Schuster Center through November 8.

November 3-8, 2015 at The Schuster - Hailed by Time Magazine as “Musical Theatre Gold,” BULLETS OVER BROADWAY is the hilarious new musical comedy about the making of a Broadway show. Written by Woody Allen, with direction and choreography by Susan Stroman, and based upon the screenplay of the acclaimed film by Woody Allen and Douglas McGrath, BULLETS OVER BROADWAY is the story of a young playwright who, in desperate need of financial backing for his next show, accepts an offer he can’t refuse from a mobster looking to please his showgirl girlfriend. Don’t miss what The New Yorker exclaims as “a fun machine from start to finish!” Loaded with big laughs, colorful characters, and the songs that made the ‘20s roar, BULLETS OVER BROADWAY is bringing musical comedy back with a bang.

AGE RECOMMENDATION:
We program the series for adults and young people age 13 and older. Our policy is children under the age of 6 will not be permitted. Occasionally a particular production will include content that is generally not suitable for those under the age of 17. For the consideration of all patrons, children on laps and/or babes in arms are not permitted at Victoria Theatre Association Broadway presentations. 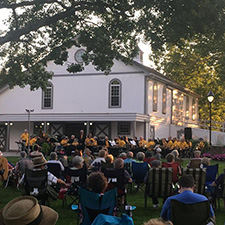 Summertime, Sousa & Sundaes
Events Calendar Featured Events
Follow Us
Dayton Local takes reasonable measures to ensure the quality and accuracy of the information on this page. Use of this site is at your own risk, and by doing so, you agree to our Terms & Conditions. You can report inaccurate, misleading or inappropriate information using the button below. Thank you.
© 2022 DAYTON LOCAL