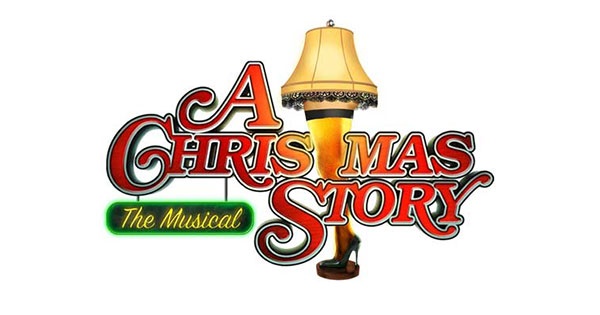 The hilarious account of Ralphie’s desperate quest to ensure that this most perfect of gifts ends up under his tree this Christmas.

There’s an old expression, ‘If it’s not broke, don’t fix it.’ The 1983 film, A Christmas Story, is in near perfect condition after more than 30 years, so I questioned the idea of making it a musical. Ends up that the music serves an enhancement to the original, kind of like Cherry flavoring to Coke, its satisfying without but the extra additives gives it a little boost. In other words, A Christmas Story: The Musical, at La Comedia through December 31 is a holiday favorite, served with a cherry on top.

All of the beloved elements of the movie are included in the stage production including the iconic (Italian?) leg lamp. In all of its long, and luscious glory the leg lamp shines, in one of the show’s brightest scenes. The song, ‘A Major Award,’ featuring an entire kick line of lamps is an example of the added entertainment value that the music provides. Plus, ‘The Genius on Cleveland Street,’ makes clear that to the Old Man the award represents his intelligence and worth, which makes its arrival even more humorous.

At the center of all the activity is the bespectacled Ralphie Parker (Matthew Hollon/Jackson Higgason) who desperately wants a Red Ryder Carbine Action 200 shot Range Model air rifle with a compass in the stock and “this thing that tells time.” That’s a real mouthful, but Hollon (who played the role when I attended) spewed it out with ease, on numerous occasions. He mastered all of Ralphie’s lines, including the utterance of F-U-D-G-E. It’s a daunting task for a child to carry so much weight (including Santa) in a show, but Hollon does it with relative ease.

The entire cast plays their parts well, including Mr. Dependable, Chris Kramer as the Old Man, who excels in whatever role he’s given.  His temperament for the role is right on key, especially while breaking out in a litany of PG rated curse words when battling the furnace or with the Bumpuses dogs. His tirade is probably hanging in space somewhere over the Dayton Mall. Furthermore, Katie-Lee Sutherland could pass as a twin for the actress who plays Mrs. Parker in the film. Her physical appearance and mannerisms are spot on perfect. Through all the craziness, Sutherland provides much of the shows heart as a loving mother both through song and tender moments like teaching Randy how to eat like a pig.

The role of Randy is split between Avi Gilbert and Eric Pettit, I’m sure the same can be said for both of them, but whichever was on Friday night, perfectly matched the mutterings of, ‘I can’t put my arms down,’ while all bundled up for school. And in the role I believe he was born to play I Mark Reauter as the grown up Ralphie/Jean Shepherd who serves as the narrator.

I give Holly Hathaway as Miss Shields (the teacher) the grade of A ++++++++++++++++ and + on her performance. She really stands out during the dream sequence when she shows up at the Parker’s home with Ralphie’s essay.

There are multiple dream sequences in the show, which are very well-done, especially ‘Ralphie to the Rescue,’ in which he saves several damsels in distress with his Red Ryder. The sequence is finely choreographed and features the skills of the talented ensemble. It’s the type of dream you never want to wake up from.

From the grumpy Santa, to the tongue stuck on the flag pole and the visit to the Chinese restaurant ‘Ra, ra, ra,” all of your favorite scenes are managed to be staged. Credit goes to the set design crew for bringing the beloved images to the stage.

A tradition for the Christmas show at La Comedia is the singing of ‘O Holy Night,’ which has become a favorite part of the holiday season for me. This year it’s sung by a chorus of children who give it their all and provide a touching testament to the song. I deeply admire their efforts and I respect the need for change, but the kids don’t have the power that the singer who performed it the last few years had. However, it does still represent the spirit of the season and is better than them singing ‘Red Solo Cup.’

Of course, before every show is the delicious buffet, featuring a wide variety of savory flavors, such as the sweet potato soufflé.

I triple-dog dare you, to miss A Christmas Story: The Musical at La Comedia.

A Christmas Story: The Musical is the hilarious account of Ralphie’s desperate quest to ensure that this most perfect of gifts ends up under his tree this Christmas. Filled with nostalgia and quirky childhood innocence, this Ordway holiday production is a heartwarming event for the entire family.