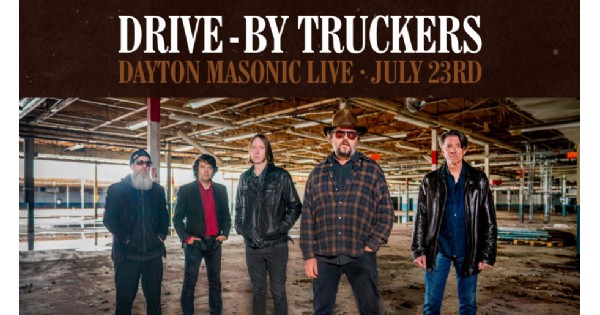 Drive-By Truckers are an alternative country/Southern rock band based in Athens, Georgia.

Dayton Masonic Live will host Drive-By Truckers on Saturday, July 23rd. Drive-By Truckers, with 25 years of writing and performance experience and 13 studio albums, has not played in Dayton city limits since the early years of the band, playing legendary venues like The Nite Owl and Canal Street Tavern.

“As we ramp up our concert series at Dayton Masonic Live, we couldn’t be more excited to highlight this legendary Southern Rock touring outfit,” said Brian Johnson of Level Up Productions. “Drive-By Truckers incredible songwriting ability backed by pure raw talent on their instruments will make this a night you do not want to miss.”

Dayton Masonic Live operating out of The Schiewetz Auditorium at The Dayton Masonic Center has a storied history. Being constructed and opened in 1928, before electric sound amplification was a standard amenity, this building was designed around a need for natural acoustic amplification.

“Even with 1700 seats, Dayton Masonic Live is truly special because of its intimacy. There really isn’t a bad seat in the house,” Johnson continued. “Drive-By truckers will be very well represented in this venue.”