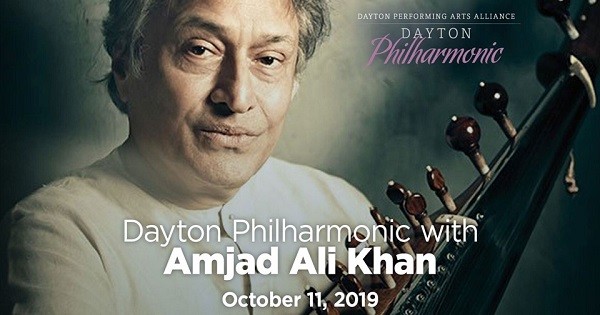 Dayton Philharmonic Orchestra welcomes Amjad Ali Khan, one of the undisputed masters of the music world for a very special evening. One night only.

Born to sarod maestro Haafiz Ali Khan, Amjad Ali Khan is the sixth generation in the legendary line of the Senia Bangash School. Since giving his first performance at the age of six, he has played for audiences worldwide, bringing a new and yet timeless interpretation to the repertoire while being widely credited with reinventing the technique of playing the sarod.

On the first half of the program, Amjad Ali Khan will perform traditional Indian Folk Music from Bengal and Assam, and he will present a Traditional Raga that he composed. Maestro Khan will be joined on stage by his sons, Amaan Ali Bangash and Ayaan Ali Bangash, who will both also be performing on the sarod. Amit Kavthekar will be playing the tabla for this concert.

Over the course of a distinguished career spanning more than six decades, Amjad Ali Khan has won numerous accolades including a Grammy nomination, the Crystal Award by the World Economic Forum, UNICEF’s National Ambassadorship and the Fukuoka Cultural grand prize.

Maestro Khan’s first sarod concerto, Samaagam, comes from a Sanskrit word meaning confluence or flowing together. The aim of this work is to preserve, through singing and playing, the essence of both Indian and Western traditions so that they can flow into each other without artistic compromise. Amjad Ali Khan purposefully used the orchestration of Indian ensemble music in the pre-Bollywood era as inspiration and incorporated Western tradition elements that do not violate the rules of Indian music. This piece has been presented by orchestras throughout Europe and the United States, including the Orchestre National d’Île de France., the London Philharmonic, the Britten Sinfonia, and the Chicago Philharmonic Orchestra.

Darke County Food Truck Rally & Competition
Events Calendar Featured Events
Dayton Local takes reasonable measures to ensure the quality and accuracy of the information on this page. Use of this site is at your own risk, and by doing so, you agree to our Terms & Conditions. You can report inaccurate, misleading or inappropriate information using the button below. Thank you.
© 2020 DAYTON LOCAL