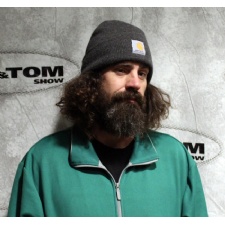 Oskay worked plenty of other jobs before becoming a stand-up comedian a decade ago, including assistant manager at an envelope manufacturing company, stock broker, the proprietor of a short-lived coffeehouse and restaurant kitchen manager.

“I got on stage for the first time the week I turned 30, and I was horrible,” Oskay said. “I just stopped throwing up before shows about five years ago. I was horrible. My jokes were good. My writing was good, but I had never performed before, and that was atrocious. I would shake and sweat profusely. It was not good. It was funny but not for the reasons I wanted it to be funny.

“It became a goal of mine that I was going to win this,” he said. “I didn’t care how many years it took, I was eventually going to get good enough that someone would pay me to emcee. That was my goal, and it took four years before I ever emceed, and things went rather quickly after that.”