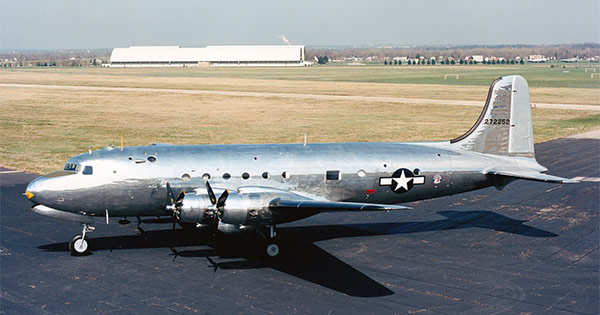 The Douglas VC-54C Skymaster is the first aircraft purpose-built to fly the President of the United States.

This VC-54C was used by Presidents Franklin D. Roosevelt and Harry S. Truman.

Carrying the staff transport “VC” designation, the aircraft was officially named The Flying White House.  However, the aircraft became better known by its unofficial nickname, "Sacred Cow", a reference to the high security surrounding the aircraft and its special status. 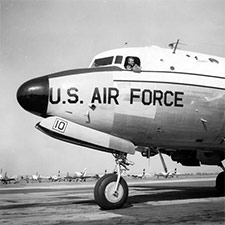 In 1943, President Franklin D. Roosevelt became the first US president to fly in an airplane while in office. The VC-54C aircraft included a sleeping area, radio telephone, and retractable elevator to lift Roosevelt in his wheelchair.

The Sacred Cow carried President Roosevelt to the Yalta Conference in February 1945.  Illustrating the high stakes associated with presidential airlift, the Sacred Cow’s serial number was changed for the flight as a special security measure.  The trip to Yalta was Roosevelt’s only flight aboard the aircraft before his untimely death in April 1945.

Roosevelt’s successor, Harry S. Truman, used the aircraft extensively during the first 27 months of his administration.  On July 26, 1947, President Truman signed the National Security Act of 1947 on board the Sacred Cow.  This act established the US Air Force as an independent service, making the Sacred Cow the “birthplace” of the US Air Force.

After the Sacred Cow left presidential service, the USAF continued using it for other transport duties until the airplane was finally retired in October 1961.  The Sacred Cow flew more than 1,500,000 miles, equivalent to 70 times around the world before it was transported to the National Museum of the US Air Force in 1983.  After ten years and more than 34,000 hours of work, the aircraft was placed on permanent display appearing as it did during President Roosevelt’s trip to Yalta.